Stars and the playoffs: what's changed and what hasn't

Share All sharing options for: Stars and the playoffs: what's changed and what hasn't 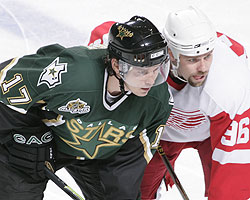 Whenever my friend and I discuss the Dallas Stars, there's almost always an early playoff exit-related punchline. The Stars seem to be a well-run franchise, but much like their old rivals in Detroit, they limp out of the postseason with their hands around their throats.

And looking at this year, there's the natural question: What makes you think that anything will be different?

Still, the nice thing is that Ribeiro doesn't need to be a Conn Smythe candidate for the Stars to be successful. If Ribeiro fits into a Doug Weight in Carolina type role for the playoffs, or hell, even a Cory Stillman in Carolina role then the Stars will greatly benefit.

Either way, he's going to have to show up for the playoffs. And not just with a bag full of golf clubs.

Some people are saying that Nagy has been a bust in Dallas, including respectable ESPN.com writer Scott Burnside. Statistically speaking, it's hard to disagree.

Still, I can only tell you what I've seen and felt from watching the occasional Stars telecast. And my immediate thought from watching Nagy was: "Wow, the Stars are borderline watchable now!"

He's not really a "force" and it's certainly possible that the Stars overpaid for him. That being said, every team needs guys who are natural scorers. That's the one thing the Stars have been missing over the years. They've had hardworking, likable guys from the top of their order in Brendan Morrow and Jere Lehtinen to elbow grease guys such as Stu Barnes.

These players are great for character and timely goals, but Nagy and Ribeiro are two guys that make it look easy. It's true that the playoffs are a time where pretty goals evaporate, but the Stars were severely lacking that finesse game outside of American Hero Mike Modano.

So far, this trade reminds me of a lot of the pre-lockout small market salary dumps, even if L.A. isn't exactly a small-market. It captures that spirit because, on a gut level, it seems like the trade hurt the Kings more than it helped the Stars.

I've watched some Stars games, and I can't lie: I never really notice him. He's never put up many points and that hasn't changed in Dallas. He's averaging around 18-20 minutes a game, so he's apparently not irrelevant. The real place the Norstrom trade will be a boon or bust will be in playoffs.

Oddly enough, that makes his add opposite from the previous two. While Rib and Nagy are potential playoff ghosts, Norstrom's the type of defensive stalwart that can make a big difference in three OT slugfests.

Smith shouldn't be a big factor, but in the ham handed tradition of playoff previews, I am forced to point out any possible parallels to last year's big stories. So if Marty Turco has another playoff flameout, it is an extremely remote possibility - EXTREMELY REMOTE - that Smith could be "this year's Cam Ward." Or Ty Conklin. [Although he's a much better puckhandler, if not for anything than the fact that he gets to watch Turco in practice].

He's a solid enough goalie, but this scenario is even less likely than Turco resurrecting the spirit of Cup Run Giguere. 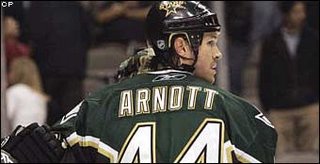 Some people thought that losing Arnott would hurt the Stars dearly, but I've always categorized him as just another interchangeable Devils Cup era forward. Some nights he wears a crimson mask and seems like a force of nature. But just as often he is not a factor.

For some reason, I just don't really like him so maybe that clouds my opinion.

While Arnott wasn't worth the money, the Guerin era in Dallas was simply cursed. It's too harsh to say that his success depended solely on Jumbo Joe, but that didn't keep him from being a disappointment. And, OK, his success did have a thing or do with Big Bird.

He's one of those guys that could come back to haunt Dallas, though. Or maybe he's another Devils Cup era forward of questionable merit. 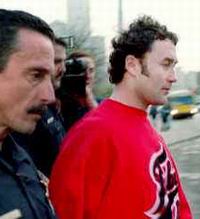 OK, I know he left a long time ago, but are you going to argue with my decision to run the FUBU jersey arrest photo? Better not.

Still, all of these changes - both plus and minus - are not as important as answering the biggest question:

Will Marty Turco have another shaky playoff run?