Stars vs. Canucks: Yes, I AM trying to crash your dialup computer

Share All sharing options for: Stars vs. Canucks: Yes, I AM trying to crash your dialup computer Damn Scott Burnside. The guy covered a lot of the same bases I was going to, including using the phrase "The Nagy Factor." Dammit.

While Burnside did a great job with his preview, I figured the series could use a "Dr. Z" from Sports Illustrated-style breakdown. Of course, this will probably make me look an idiot. 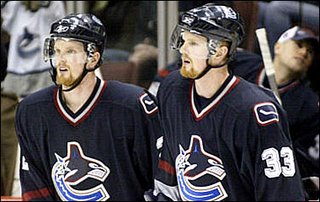 Meet the Sedin twins. After the Canucks oddly drafted the twins with back-to-back picks, they quickly drew the mocking attention of anyone who loves to make fun of Gingers and twins [read: anyone who is neither a Ginger, nor a twin].

Is it me or is there an unspoken list of OK groups to discriminate against? To my knowledge, there are three key groups of people. 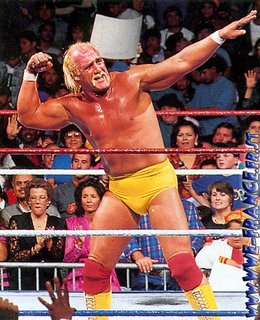 1. Too-tall-to-be-coordinated people such as George Muresan. 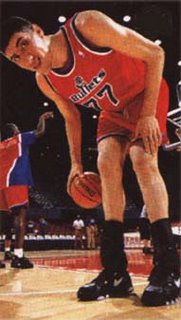 2. Poor, defenseless bald men [special kudos to bald-in-denial icons such as Hulk Hogan and Clippers center Chris Kaman - who to my disgust shaved his head]

I think it says something about our society. OK, that's not really true.

What was I talking about again? Oh, right...the Canucks under-powered offense v. the Stars clingy defense.

As Burnside beat me to saying, the Canucks certainly don't have a ton of offense beyond the puck cycling mania of the Sedin twins. It's kind of amazing that people were raving about the "package deal" possibility of Forsberg-Naslund, when the superior Swede duo was right under their nose. [At least when you consider Foppa's health issues and Naslund's decline]

Naslund is not quite the factor he used to be, and even in his gravy days the Canucks did little in the playoffs.

The Stars D might not have the same kind of muscle that the Canucks D does, but do you really need much beef against the dainty Canucks?

The Stars haven't exactly been the poster-children for the New NHL. This is my way of saying that they, for the most part, have the aesthetic drawing power of Wet T-Shirt contest between Rosie O'Donnell and John Goodman.

They did make things a little bit less agonizing by adding oomph in Ladislav Nagy and Mike Ribeiro, but that won't make people confuse them with the Buffalo Sabres.

The Stars O needs to continue their positive trend of being one of the best teams at coming back from deficits, but even more important, they need to protect Turco with the occasional early lead.

Sadly for the Stars, this is not very likely.

OK, I'll level with you on this one: I don't have a clue. The Canucks have a fantastic PK and so do the Stars. The Stars have a slightly better powerplay, with two defensemen in Boucher and Zubov who can light it up.

On some level, I cannot help but think: Turco's a good goalie, right? Sooner or later, much like the Ottawa Senators, something has to go right. Right?

I mean, really, Turco was great at the All-Star game when he was mic'd up. You feel bad for the guy, especially since the Stars playoff seeding didn't always reflect the talent on their roster for the past few runs.

But man, Turco didn't get the hot chick hanging out with eyesore treatment with this one. With all that pressure on Turco not to choke, the sad fact is that he could stand on his head and still very likely be the inferior goalie.

Luongo is a playoff newbie, but with all the hype he's encountered over the years, who would have thought that the other guy would be on the hot seat?

Edge: Luongo gets the nod while the Stars suffocate Turco with "When will the other shoe drop?" talk.

Fearful prediction: I don't know why, but I can't help but pick the Stars 4-2, since a game 7 might make Turco implode. Pass the antacid.