The view from my playoff seat

Share All sharing options for: The view from my playoff seat

(Author's warning: I absolutely suck at photography, and where I sit, pretty much everything gets shot through a pane of glass. It is pretty evident that my autofocus camera decides that it would rather focus on the glass than the people behind it, but I really do not have the know-how or the sobriety to fix it; my solution is really just to point-and-shoot some more. I apologize these pics aren't better, but you should see the ones that did not make the cut!)

(Alternatively, you might just say that this is my perspective as I got progressively drunker throughout the game.) 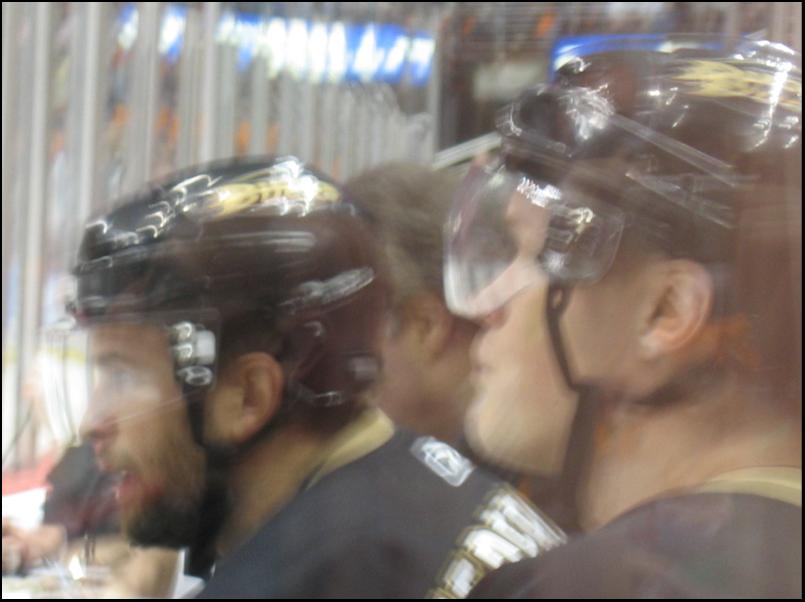 Here's a real rarity, both Rob Niedermayer and Sammy Pahlsson sitting side by side in the box, begging the question, "Oh crap, who's going to kill this penalty?"

This was early in the first period, and the lady sitting next to me (between myself and the box) really thought I was nuts, between the "Go get 'em Sammy!" yells and me trying repeatedly to get a half-decent photo (turns out the best I could get was a quarter-decent shot).

After they served their time and I put the camera back in my pocket she sighs in the way only an O.C. woman can, and mutters, "You act like you've never been here before."

My only reply? "Well, I never bring my camera here; usually it's just drinking and yelling." It's too difficult to quickly explain and justify a man-crush to a woman that disgusted. 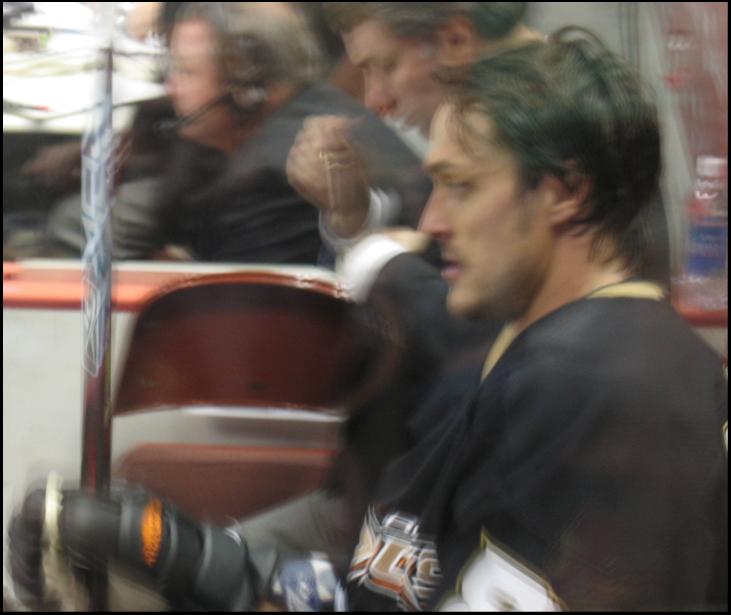 Teemu Selanne in the second period, after his unsportsmanlike penalty. For some reason, I get to see Selanne in the box a lot, and most of the time it is stuff like diving or even his illegal stick. I always try to yell some words of encouragement in there, because really, who likes a depressed Finn?

Selanne is probably the only player who does any sort of acknowledgement to the crowd, though it sometimes isn't more than a quirky eyebrow raise, as if to say, "Who knew that they would call THAT in this day and age?" I always try to control my eyebrows so they don't send the message, "I knew." 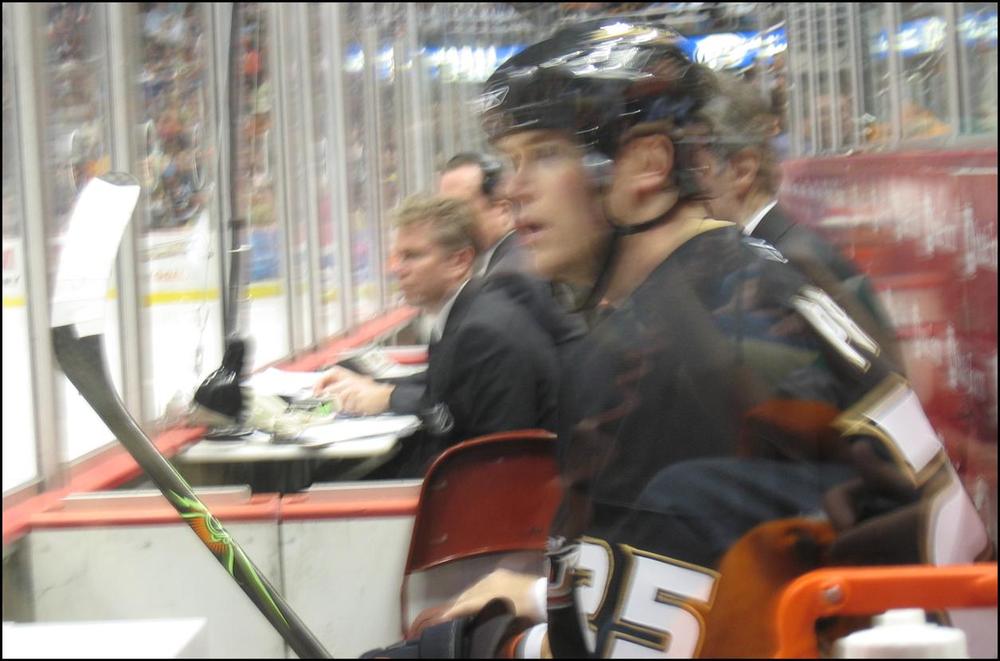 Chris Pronger in the box. I never got a really great shot of him (a common theme here), but I was pretty excited to have him there. Despite sitting in these seats six times this year, Pronger had never ever EVER come to visit. It was kind of depressing, really, because I saw him take plenty of penalties on TV.

Is it me, Chris? Is a trade demand imminent? 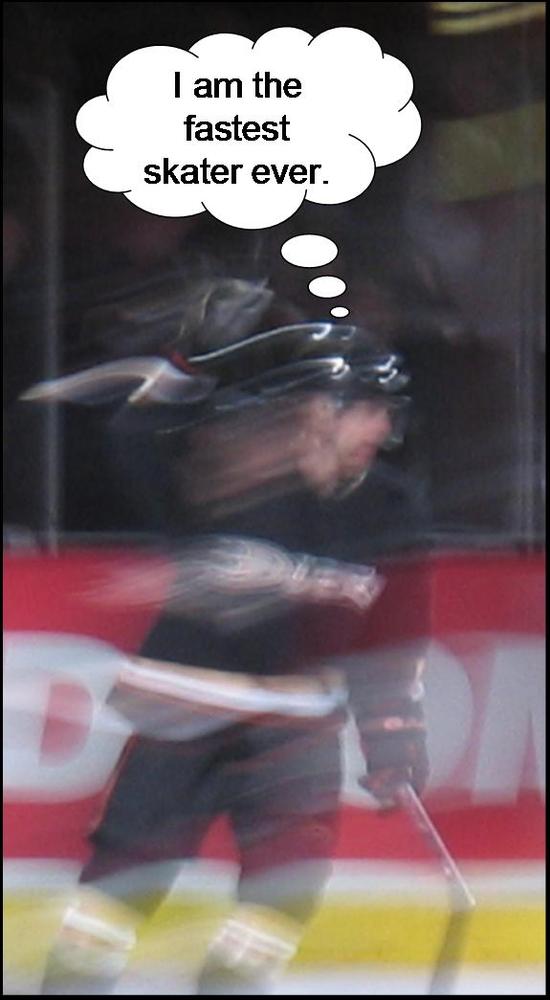 OK, by now you can see that I am extremely untalented, but to prove it here's Andy McDonald parading around at warp speed as the first star of the game, not in the least bit considerate of us new photo-bloggers who can't seem to focus on anything but the glass in front of them. It occurred to me on my way home that tonight was the second time I had ever thrown a hat on the ice at an NHL contest, and both times it followed a McDonald goal against Vancouver (though this was the first time I actually threw it for an actual hat trick).

Flash back to preseason 2005, immediately following the lockout. In lockout-starved eagerness, I snagged Row B tickets to one of the first preseason games the Ducks played, against the Canucks. Recall, if you will, the format of those first preseason games: no matter the outcome of the game, they would still stage a shootout afterwards (even in non-tie situations). Well, we had lost the game 3-1, and were on our way to also losing that shootout, but Andy Mac managed to score one against Dan Cloutier, and just out of post-lockout excitement (and disbelief that we could lose a game and a shootout), I threw my hat on the ice.

Did I mention that I was drinking that night also?

Any way, there were still four or five shooters left, and the refs noted that there was a hat there sitting awkwardly by the penalty boxes. But they kind of looked at each other and shrugged; after all, it wasn't in the way of anything. All they needed for a shootout was the center stripe. So it sat there, uncomfortably, until the shootout had ended.

I was kind of proud of myself, though. I rationalized, hey, that's the first hat that's been thrown in a year-and-a-half. Welcome back, NHL.

(Think you are better than me at photographing from your playoff seat? Prove it! E-mail your best shots to japers.rink.photos@gmail.com)