Share All sharing options for: Anaheim’s answer to Spalfredheat—Project Norris

Well, here’s a wrinkle I didn’t expect in G1. I was wondering whether Carlyle would play the Niedermayer-Beauchemin pairing or the Pronger-O'Donnell pairing against the Spezza line, but I really hadn’t considered the option of Niedermayer-Pronger. Not that it’s an irrational play, mind you, but rather it’s just something Carlyle never really toyed with. Each Norris nominee had their own partner and played their own separate even-strength minutes.

Well, cut to G1 vs. Ottawa, where the Senators presented the best one-line attack of these playoffs. Carlyle of course matched the Pahlsson line out against them, but decided to throw a Norris-Norris wrinkle at them as well, something he hadn’t done all season, really.

I'm a big fan of Vic Ferrari’s 5-on-5 head-to-head minutes site (you can read about it here or access it directly here). It looks at NHL shift charts and shows who a player shares his even-strength shifts with—both teammates and opponents. According to the G1 stats, Pronger and Niedermayer played 7.4 even-strength minutes together—which is more shared 5-on-5 time than they had in any of the first three playoff rounds!

Here's how their 5-on-5 total ice time was split in each round of the playoffs (SN = Scott Niedermayer, CP = Chris Pronger):

This is really a huge change in strategy to introduce in the Stanley Cup Finals, but sure enough, late in a tied game with the Spezza line out, who’s on the ice for the winning goal? The checking line, backed by Niedermayer and Pronger, a.k.a. Project Norris. 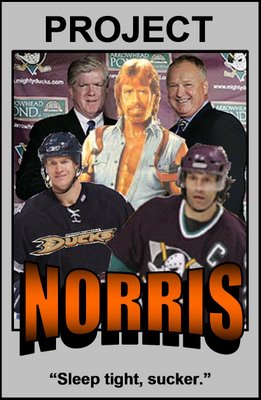 
Coach Carlyle took a risk shuffling up his defensemen up for the Stanley Cup Finals, and it's something certainly to follow as this series progresses. Initial returns, though, look good.