Ducks Gameday—A face only a mother could love

Share All sharing options for: Ducks Gameday—A face only a mother could love 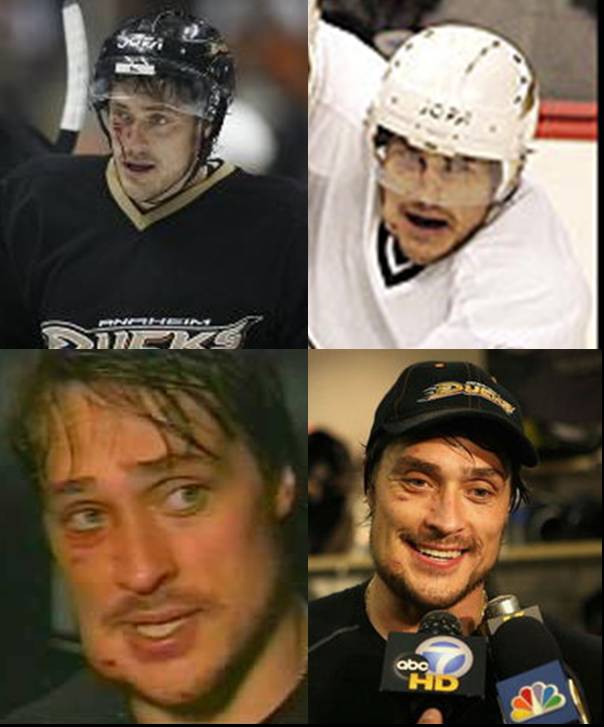 Anyone else inspired by Teemu Selanne’s playoff face lately? This notorious pretty-boy has not only been hit in the head by a puck from a Wild player (during pre-game warm-ups, no less!), but he’s picked up facial cuts from Wild sticks, Canuck sticks, and even Chris Pronger’s stick over the last few weeks. Certainly we’re seeing a more driven Selanne than in years past; no way you’d ever use "Teemu" and "battle-tested" in the same sentence a few years ago. And maybe the best part? He still seems to be loving it.

Teemu’s cut-up face is 80% inspiring and 20% hilarious, which I figure is about the right balance to encourage a series comeback tonight.

Other than the final score, I like the game the Ducks threw at the Wings in G1—they skated and anticipated well, pulled the crowd out of the game for stretches, and got pressure in front of Hasek. The Ducks really need to keep up that effort and discipline tonight, because Detroit will certainly be coming out better—the Wings are great at smelling blood and goin’ for the kill.

Special teams execution, of course, will be critical, as Detroit in G1 scored a pair of power play goals to the Ducks’ none, despite Anaheim owning the majority of power play time. It had been 15 games since Anaheim had its power play outscored by its opponent’s; over that stretch the Ducks had scored 17 power play goals and allowed only 3, amassing an 11-1-3 record. Anaheim needs to keep its power play ledger even-or-better if it hopes to pull a win out; that’s really its bread-and-butter.

Prediction: Ducks 3, Red Wings 1. Perry, Pahlsson, and Pronger score the goals, while Teemu adds an assist and another playoff scar.