Anaheim top-line winger Chris Kunitz broke a bone in his hand late in G1 after scoring the Ducks’ only goal. He had surgery on it yesterday and will be out for the duration of the playoffs. It turns out he was hurt deflecting a Pronger shot, but here's how I had pictured the injury: 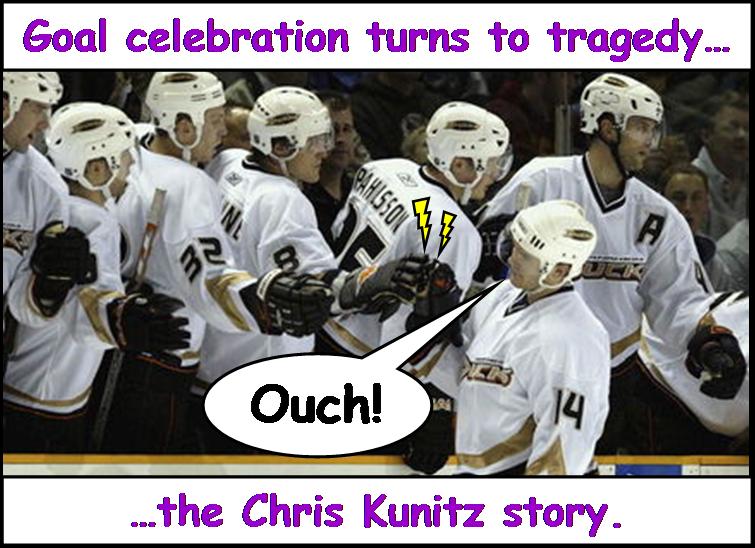 So what does this injury mean to the Ducks? Well, on the surface it sucks—the Ducks are not very deep at forward, and fourth-line goon left-winger Shawn Thornton was injured in G2 and may not be available either [EDIT: Apparently Thornton is available tonight.].

In a perverse sort of way, though, injuries to left-wingers are OK for the Ducks, as it is certainly their most versatile position. Randy Carlyle is fond of his pairs—McDonald and Selanne, Getzlaf and Perry—and has moved left wingers to move up and down throughout the year. Coach Carlyle certainly has his options for a top-line fill-in, whether there be a need for speed (Marchant, Shannon) or grit (Penner, May), and I think Teemu and McDonald can operate with most anybody crashing the net. Honestly, I don’t know if the top line will be ‘set’ anytime soon—there are some benefits to the rotation method as well. 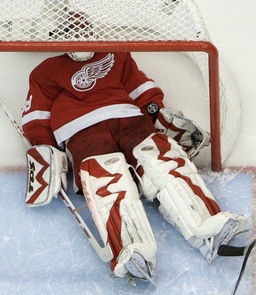 The Ducks come back to Anaheim from a pretty successful trip, not only because they got a road win, but because they effectively were able to neutralize a lot of Detroit’s home-ice-advantage. Before the series, the Red Wings had played 47 home games (regular season and playoffs) and been outshot only 5 times. On average, Detroit outshot visitors by more than 12 shots per game.

The Ducks not only outshot the Wings in both G1 and G2, but manufactured two tie games with 5 minutes left in regulation—essentially they were able to turn both games into coin flips. Considering Detroit’s home record (now 35-5-9), that’s quite an accomplishment.

p.s. I'll be at this game. I didn’t get the Row B seats, unfortunately, but I’ll still be in the lower bowl, behind Giguere for the 1st and 3rd periods—Sec. 201, Row N. I’ll be the guy in the green t-shirt acting entirely too drunk for 6 in the afternoon. You can come by say hi, but I reserve the right to reflexively defend myself. Oh, and just to keep the tab running, the Ducks are 8-0-1 when I've been in attendance this year, outscoring opponents 38-15.