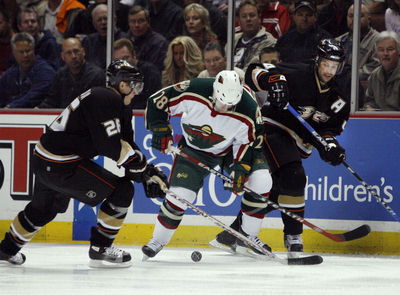 Occasional readers to this blog should know that I carry an unhealthy amount of admiration man-crush for Sammy Pahlsson, the Ducks' stopper-line center and, if there were any justice, Selke-award winner.

But did you know that opponents have not scored a power play goal against Pahlsson in more than six weeks?!!

Seriously. Read it again. The last NHLer (and I use that term loosely) to score a PP goal against Pahlsson was Rob Blake! Back on March 18th, in Game 73 of the season.

It's unbelievable, but in the 17+ games since then, Pahlsson has played 80 penalty-killing minutes (53% of Anaheim's time, including 3-on-5s) without surrendering a single power play goal.

And remember, this isn't just killing penalties for a disciplined team; the Ducks consistently have been among the most penalized teams in the regular season as well as the playoffs. This playoff year, the Ducks have spent some 68 minutes on the power play and 87 minutes shorthanded, yet Anaheim's power play is still outscoring its opponents' power play 9-3.

"It's easy to pick [Scott] Niedermayer and [Chris] Pronger because of how great they are and their respective résumés, stats and ice time they put in. But if you're looking for a player who can set a tone for a series, it's [Samuel] Pahlsson.

"I like him because he's an in-your-face kind of player. He's 6 feet, over 200 pounds. He's one of the most underrated checkers in the league. He's like Sean Avery, but without the physicality. He comes at you at an angle, never allowing you to get open ice. … He reminds me a lot of Guy Carbonneau. [Pahlsson] shadows and frustrates the opponent's best player. He's on them like glue."

Did I mention he's playing this year for $650k? And that he has as many points this playoff year as the Niedermayer brothers combined? Go get 'em, Sammy! 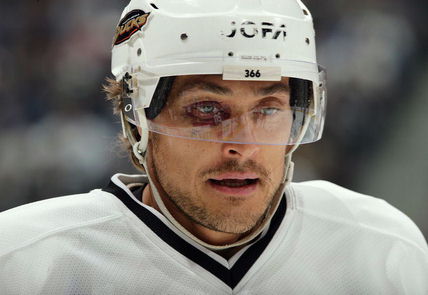 Other than Pahlsson, there are only two Duck players born outside of North America: crazy Russian goaltender Ilya Bryzgalov and the Finnish Flash Teemu Selanne.

Teemu thus far has been pretty well-checked in the playoffs, particularly on the power play. Of the 9 power play goals the Ducks have scored, he has been on the ice for only 2 of them, and assisted on only 1, despite leading all Anaheim forwards in PP ice time.

I really shouldn't be that critical, though. He has been going against the regular season's #1 and #2 penalty-killing teams, and they certainly should be keying on him and his league-leading 25 power play goals. And Teemu is still getting it done at even strength; his 4 even-strength points and +2 are both team-leading.

Still, kudos to Chris Pronger for giving his annual 'superstar wake-up call' by high-sticking Teemu right below his right eye in G2. If you recall last year, Pronger challenged Ryan Smyth by knocking half his teeth out; this is no doubt a similar effort to toughen up Selanne for the playoff grind.
------------------------------

Sure I know that the scrappy Canucks could very well win tonight's game or even win this series—any team willing to sacrifice in front of a monster goalie is capable of that (see also: 2003 Mighty Ducks). But this is really a chance for the Duck to press its webbed foot across the orca's throat and lay its deathgrip on this series, and I think the boys got it in 'em.