Ducks Gameday—The Campbell Bowl is in the house tonight!

Share All sharing options for: Ducks Gameday—The Campbell Bowl is in the house tonight!

I don't want to seem overconfident about the Ducks' chances tonight, because quite frankly, I'm not sure what to expect out of either team in G6—the Wings are facing their first legitimate 'must-win' game of the season, while the Ducks certainly do not want to return to Detroit. Each game in this series has, in its own way, been somewhat of a surprise, but the fact remains: if the Ducks win at Honda Center tonight then they win the west.

When the Ducks finished a four-game sweep of the Minnesota Wild on Friday to reach the Stanley Cup Finals for the first time in their 10-year history, Kariya, the captain, was called to center ice to pose for a picture with the Clarence Campbell Bowl, given to the Western Conference champion.

He stood stone-faced for the picture. Then, he refused to touch the trophy. Kariya's message: We haven't won anything yet.

The only reason he posed with the trophy at all, he said, "was because I figured I'd get fined if I didn't." 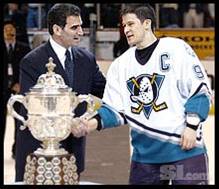 In 2003, the 7th-seeded Mighty Ducks had swept the defending cup champion Red Wings, defeated the top seed Dallas in six games, and allowed only one goal to the Wild in another sweep. Their first nine victories were all by one goal, including five in overtime, and all this despite starting each series on the road.

But when presented a trophy celebrating those achievements in front of his home fans, Kariya refused to acknowledge it. Yes, I know he was sticking with tradition and superstition, but it turns out that would be the last hardware that Duck fans could cheer for at the Pond that spring—ignoring the Campbell Bowl didn’t win them the ultimate prize, instead they treated a western conference title as a paltry occurrence rather than the playoff miracle that it was.

Kariya and the '03 Mighty Ducks are hardly unique in their trophy avoidance; teams have been shunning the Campbell Bowl with regularity (and lately, with no success). Kind of a shame, really, as only one team wins the prize each year for winning a really tough western conference—it would be nice if it could be a cause for celebration instead of the usual cold shoulder approach.

So here's my theory: if the Ducks win G6 at Honda Center (by no means a given), Scott Niedermayer should go up and lift the Bowl over his head. Carry it around a lap. Pass it on to Teemu. Basically, Scott should act as if winning the west matters—that it's an achievement worth celebrating.

The crowd would go nuts. The TV cameras would love it. Maybe there will be an ultimate celebration later for the home crowd; maybe there won't be. But at least there won't be regret in thinking back at the time when the team could have celebrated with its fans but didn't.

So if the Ducks win tonight and are presented with the Clarence Campbell Bowl: lift it, touch it, or ignore it? You can shoot down my theory in the comments.