On Tuesday, I gave some reasons why I’m cautiously optimistic about the Ducks facing the Wings. Today let’s look at the other side of the coin: why Detroit scares the crap out of me.

Look, I think it’s about time someone other than a Detroit blogger came out and said it, but the abuse of this argument is nuts. Yes, in the two seasons since the division-heavy schedule started, the Red Wings have accumulated 81 standings points from its weak sisters CBJ, CHI, and STL (84% of the 96 points possible).

But the mere fact that the Red Wings beat weak teams does not mean that Detroit is overrated—it means that Detroit could be overrated—and that’s a key difference. Beating bad teams doesn’t reveal a lot about a team, but beating good ones does. The Red Wings have done very well eliminating both Calgary and San Jose, two impressive series wins, and I think they’ve shown throughout the year that they are more than soft standings points.

Lidstrom, plain and simple, deserves the Norris Trophy—I’ve never been exactly clear on what criteria to use, but I would trade either Pronger or Niedermayer straight up to get Lidstrom, so I figure that’s enough of an argument. His play in his own end is a thing to marvel, so much so that any offense he provides is gravy. And yeah, he gives shitloads of gravy.

Strangely, I don’t think it’s going to be a big key for the Selanne line to score that much against Lidstrom and the checkers. Rather, I think it will be important that the Selanne line occupy that defense for as many minutes as possible to free up some Nick-less shifts for Getzlaf & company. 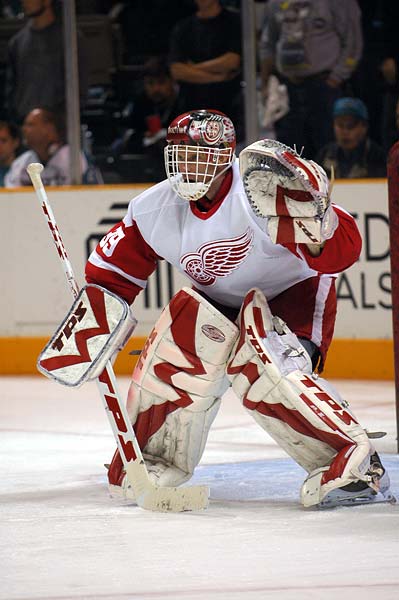 But even then there’s the Dominator, Mr. Effing Hasek. Detroit fans have been reminding me that Hasek has never lost a series for the winged wheel, and I don’t think he intends to start that now. While the Ducks have dispatched some pretty awesome goalies already in Backstrom and Luongo, one key difference is that neither of those goalies had any previous playoff experience. It was a new gig for them, and though they both were really impressive, they couldn’t pull of the Giguerian debut needed to stay alive.

Hasek has no such problems. The guy has been stopping playoff pucks since ’91, and this will be his 110th playoff appearance (36th for Detroit). This will be the first time the Ducks have faced Hasek in the postseason. He’s the kind of goaltender that keeps me up at night seething—and he might have that effect on a few Duck players, as well.

The long layover has killed the Ducks in the past

See the ol’ "rust" pattern? Now to be fair the Ducks have done well after some layoffs (8 days after sweeping Detroit in ’03, 6 days after beating Minnesota in ’07), but those have always happened in the first round. Later round layoffs have really killed this Anaheim team in the past; here’s hoping they rediscover their game sometime early in G1 this time.

Karma will be the death of me

Towards the end of the season, one of my buddies checked the standings and reported, "The Ducks are only two points behind Detroit for first in the west."

My scolding reply: "That’s not important—how many points we got on the Sharks? What is critical right now is that the Ducks hold the Pacific; what is not critical is that we catch Detroit. First or second, we are going to have home ice against tough opponents. The only time 1 vs. 2 will matter is if both top seeds survive to G7 of the western conference finals, and what are the odds of that?"

I can feel the karma coming, too. This has all the makings of last year: But there may just be one key difference this year, hopefully one strong enough to sway the winds of inevitability. This time Pronger’s on our side.