A few photos of the team handshakes after Detroit's 2-0 win to clinch a WCF berth in San Jose on Monday: 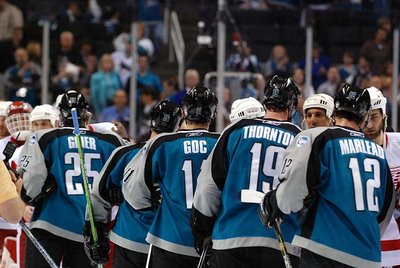 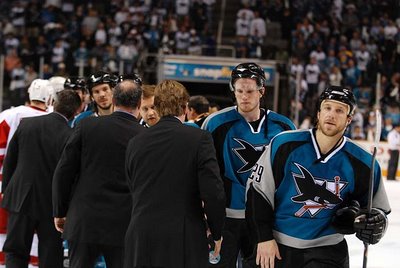 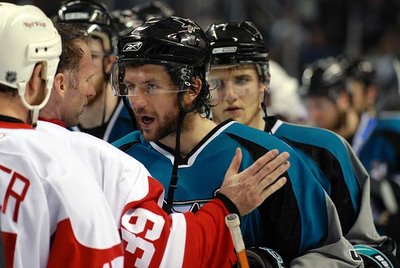 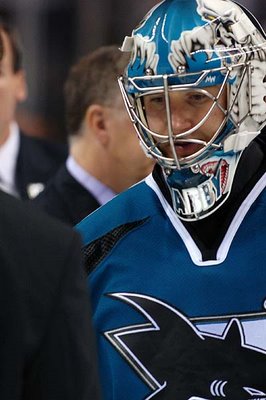 There are a few notes and photos from the game here, there will be more up soon.

The bottom line is that San Jose's very productive power play and blueline dried up in the second round. The secondary scoring that should have picked up the slack from an injured Guerin, Marleau and Cheechoo did not, and the Wings did an excellent job of shutting down Thornton and Michalek. Late period meltdowns handed Detroit a few games in this series, most notably in game 4, but a strong defensive performance and playoff intensity by the entire Red Wings team were big factors in their series win.

The Wings were without 2 of their top 6 defenseman in Game 6 (Schneider, Kronwall), and they will not be back for the WCF against Anaheim as well. The result was 29:05 of ice time for Lidstrom, and 26:15 for Chelios, something that can not continue indefinitely. Combined, their age is closer to 100 than it is to 50. The Ducks are just about as large and as quick as San Jose, and they have more of a mean streak. From the SJ-ANA games I saw this season, the Sharks tried to dictate the play physically to wear the Anaheim Ducks down. The Ducks tried to hit people because they are there, and if something positive happens offensively as a result, it is seen as a bonus. The fact that Anaheim lead the league in fighting majors during the regular season has not really translated to the playoffs, but it is just bubbling under the surface.

My prediction: Pavel Datsyuk and Henrik Zetterberg will be successful early, but Anaheim will be able to play the body and eventually slow them down. The Ducks are going to pound on the "4.5" Detroit defenseman, and the effects will be evident as soon as game 2 or 3. Corey Perry will flop into Domink Hasek from contact that happened 15-20 feet out, and Bertuzzi and Holmstrom will get an eviction notice in front of the crease from Chris Pronger (a.k.a. Beaker). Samuelsson will continue to score goals 5-on-5, and on the point for Detroit.

Hasek will steal two, but the Anaheim Ducks will win in six games.