Counterpoint: 9 questions about the Ducks—answered

Share All sharing options for: Counterpoint: 9 questions about the Ducks—answered 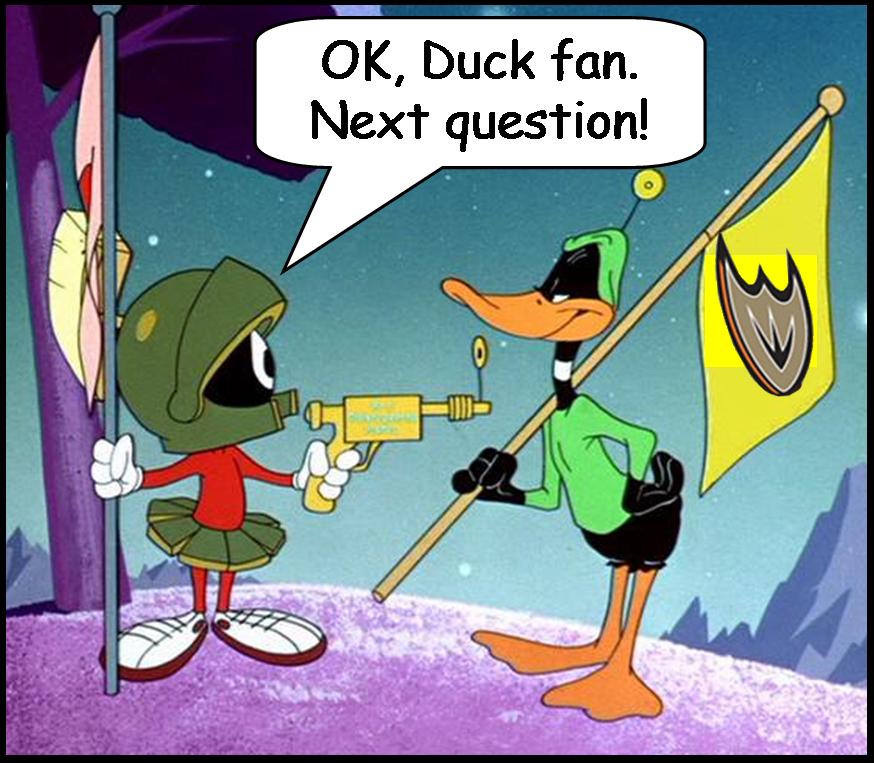 Well, as part of the Sens Army-inspired cross-interview from the last post, Ottawa-blogger Ben sent me a set of questions to answer about the Ducks and their postseason thus far. I didn't get home until really late last night, so at times my answers might suffer from late-night fatigue, but I think generally this captures my impressions about the postseason Ducks.

Feel free, as always, to tell me what I got wrong, or ask anything else you might be curious about. Without further ado, here's Sleek helping Sens fans Better Understand the Ducks:

(Ben) 1. Although the Ducks are well known for their defence, who is their most consistent scorer? Are you worried that your top scorer is a defenseman?

(Sleek) Hmm, putting answers in my mouth already, eh? Among the forwards these playoffs, probably our most consistent scorers have been the PPG line, or the "kids" (Penner, Perry, Getzlaf). Not so much in that they actually score every game, but they can be absolute monsters along the offensive boards each and every game. Partially what explains this is that the Selanne line naturally draws the best defenders, and the kids get to go nuts against lighter competition.

Among defensemen of course it's Pronger--he runs the power play with Scott, and he gets enough touches at even-strength to get on the scoreboard regularly. Am I bothered by Pronger scoring as a defenseman? Hell no! Remember, the Ducks played against this guy in the WCF last year, and the difference when he's on your side is enormous.

2. How would you compare Giguere's performance this year as opposed to his Conn Smythe-winning year?

No comparison. 2003 was a story that even on his best night can't be replicated. They should take that footage of Giguere in the first three rounds of 2003 and show it in history classes--sure he was a big goalie but he was in the exact right spot for every shot. And there were a TON of shots. Critics I think focus too much on his pads and ignore his positioning, and that year he had both going to their fullest.

I don't want to knock this year at all, though. He's been great, but he also has a better team in front of him than ever before. Long gone are the 40-save days of yore. The real benefit I think Giguere gets these days is his defense controlling his rebounds--the Ducks are much better at it this year than in any Mighty year. Still, he's absolutely money in critical situations and is a real stabilizing force on the ice; he still is in my opinion one of the top five goalies in the league. I'll say this: if I had to choose between re-signing Selanne or re-signing Giguere (and this is probably a real upcoming scenario), I'd have to take Giguere. He guarantees that you won't fall apart at your most critical position.

3. Other than Giguere, who's having an outstanding playoff this year? Who's underachieving?

The checking line (Pahlsson centering Rob Niedermayer and Moen) has been outstanding--they are having a better playoffs than regular season, and I was damn proud of them then. They are essentially shadows that will take all the hardest minutes at even-strength and short-handed. The Spezza trio will definitely be seeing a ton of these guys. Quite simply, they have the ability to make guys disappear from the scoresheet--not always, but they can do it for stretches. Their real knack is making opposing scorers play defense, and they have been producing. Pahlsson is a +6 and is fourth in team scoring.

Underachieving would probably be the top line, mainly Andy McDonald. Ever since I threw my hat on the ice in G1 against Vancouver, Andy Mac has been extremely quiet on the scoresheet--1 goal and 1 assist in his last 10 games. Sure the top line is always getting the attention of the opposition's best stoppers (and don't get me wrong--that in itself is pretty huge), but in the regular season they were able to overcome it and score like crazy. Last year in the playoffs, McDonald went through a slump like this one and later it was revealed he was injured, but I'm not sure that's the case this time--the line looks good despite not producing as much as it could, but I'll credit some great defenses and some great goalies for holding Teemu and Andy Mac in check. The top line lost Chris Kunitz for the playoffs in G1 at Detroit to a broken hand, but Todd Marchant has filled in smoothly.

4. How do the Ducks intend to shut down the top-scoring line in the NHL playoffs?

Tons and tons of Pahlsson. The checking line has been doing this exact sort of assignment since game one of the season. Carlyle mixes his lines every once in a while, but one thing that he refuses to touch is Pahlsson-Moen-Niedermayer. They have played all 82 regular-season and all 16 playoff games together without any line-juggling and without any injury, and they know their roles to a T.

On the back-end, I'm unsure which pairing Carlyle will prefer. If it were me, I'd put Pronger and O'Donnell out--they are goal deterrents also. Detroit didn't score a single power play goal or even-strength goal with Pronger out on the ice. Even so, Carlyle often declines my advice and uses Scotty Niedermayer and Frenchie Beauchemin instead. Not a bad option, really, as Scotty brings a lot of recovery speed and puck smarts, and Beauchemin isn't any slouch either. I'm guessing you'll see these two against Spezza & friends, and Pronger can go frustrate somebody else.

5. Who is the Ducks' hidden weapon? The one that the Sens may not have heard of, but should watch out for.

You've probably heard of him, but watch out for Corey Perry. Sure, Getzlaf is all the rage and he's been playing tremendous hockey these playoffs. But Perry is the sneak, the whiner, the diver, and the sniper. He can dazzle with the puck, then get pulled awkwardly down into the goalie, then tie up a defenseman trying to get up, then snatch the puck and roof it. Opponents hate Perry, and probably rightfully so, but he can be damn effective. He can act with confidence, also, with the knowledge that he won't have to fight his own fights; these are the punch-loving Ducks, after all.

6. Who is on the Ducks' top scoring line? Are they significantly better than the other lines?

In the regular season and start of the playoffs, it was Selanne-McDonald-Kunitz. Replacing Kunitz now is Marchant. Teemu and Andy Mac are fantastic together; they really have that connection that Kariya and Selanne used to have--speed and space. They are fantastic at stop-and-start plays, and both can really turn on the jets.

The last time I really saw the top line struggle like this was at the start of the season. Teemu only got 1 goal in October, yet each line chipped in goals from different players and the team didn't suffer a regulation loss until its 17th game. And that's the same kind of team I'm seeing now, almost frighteningly balanced--the top two lines have 27 points apiece while the checking line has 26.

7. How would the City of Anaheim reacted if the Ducks had lost their series against the Red Wings?

Two ways to answer this question. First off, the city of Anaheim as a whole would be mostly oblivious--hockey here is still an underground sport shared among individuals. By no means would you go up to someone in Anaheim and assume they knew the Ducks were in the Cup Finals, but you could probably assume they root for Vlad Guerrero or Kobe Bryant. The market is coming along, though, and it certainly helps that the team is winning.

For Duck fans, though, there's probably two teams we detest losing to more than any other--the Detroit Red Wings and the Los Angeles Kings. It would certainly have been a painful loss, tempered by the positives of reaching the conference finals again and losing to a 1-seed.

8. How much do you love Brian Burke? A whole bunch?

Hell yes, especially when I look around the league and see how other GMs mismanage their cap and rosters. Plus he's a really good personality to have in Southern California--a tough guy blowhard lawyer, a great fit!

I will say this, though. In my mind, I've still maintained that Bryan Murray still retains the best GM in team history for what he did in 2003--everything he touched turned to gold that year. He acquired Adam Oates, Petr Sykora, Sandis Ozolinsh, Rob Niedermayer, and Steve Thomas over the course of the season and all proved critical in the team's cup run. When Oates retired and Kariya ditched the team after G7, Murray nabbed Fedorov and Prospal, probably the two best free agents available at the time, which I'll also give him credit for even though it didn't work out. Plus he drafted Getzlaf and Perry and signed the undrafted Penner.

Sure, Burke has had his moments, but Pronger pretty much fell into his lap last summer, and he held Rob Niedermayer at the exact right moment to sign Scott. And he probably was more lucky than prophetic on the Selanne deal. But I got no qualms with Burke--he's molded his team and I like the results.

9. If the Ducks don't win the Cup, is Pronger's wife gonna be pissed and make him request a trade?

Hell, she might request it even if they win. Honestly, I have no insight into this, other than it's probably unlikely that they'd pull the same maneuver twice. Then again, nobody in Edmonton saw it coming, either...

So, that's my late-night take. Anybody got anything to add?