A Humble Request on Behalf of Anze Kopitar

Share All sharing options for: A Humble Request on Behalf of Anze Kopitar

Get your head out of your asses, NHL.

How in the name of holy hell does Kopitar not at least get nominated for the Calder Trophy? I’m fine with the fact that Malkin will win the Calder (I mean, he had 85 points this year), and Paul Stastny getting nominated is cool, too. (He played with Joe Sakic, but still, he’s pretty good.)

Jordan Staal getting nominated for the Calder over Kopitar is one of the greatest tragedies ever instituted in the history of the world. Not to be hyperbolic, but the Indians who sold for beads think Kopitar got screwed over. People are made saints for suffering lesser acts. To the stats!

Kopitar had 61 points in 72 games. Jordan Staal had 42 in 81. That’s all you really need to know, so if you’re short on time, you can stop reading. (Make sure you tell your friends about my great Indian joke, though.) For those who have time, keep going. 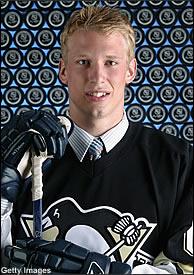 Kopitar got beat out by this guy? Jesus...

Jordan Staal had 7 short-handed goals, which some people say probably gave him the nomination over Kopitar. I don’t want to hear that jibber-jabber. That’s like giving the Silver Slugger Award to the player with the most inside-the park home runs. It’s not like Kopitar didn’t play short-handed; he had 2 short-handed goals himself. Here’s a question: who led the league in short-handed goals last year? I rest my case.

Wait, no I don’t! There’s also the matter of assists. Kopitar had 20 goals and 41 assists. Staal? 29 and 13. That’s not a point total, that’s a pitching record. I would personally have a player on my team that was primarily an assist man (like Thornton or Crosby) than a person who primarily scores goals (like Cheechoo or Selanne). There are countless examples of guy who score a lot of goals one year (Petr Prucha, Glen Murray, Rick Nash, etc.) and then have trouble repeating their success the next year. Any asshole (read: Ryan Smyth) can stand in front of the net and score a few goals. This is all a round-about way of saying that a 19 year-old who gets 40 assists is much more impressive than an 18 year-old who gets 30 goals.

Furthermore, Staal played with Ryan Malone and Mark Recchi while Kopitar played with Dustin Brown and some guy. I love Dustin Brown, but anyone who’s watched him play knows that he’s basically a moron; he doesn’t know what the fuck is going on out there. Kopitar played against a team’s best opposition and quite often made them look foolish. He single-handedly fucked Chris Pronger in his first NHL game! I mean, God dammit! 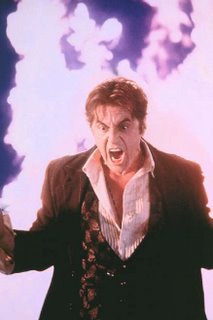 I know how you feel, Al.

The only, and I mean only, reason Staal was nominated over Kopitar was the fact that Staal got more national exposure at the end of the season. (And you have to love a league where some dude from gets more exposure than the star of a team in LA.) Kopitar got a lot of hype at the beginning of the season, and then he slowed down a little bit and got hurt at the end of the season. I’m sure the fact that Staal has a famous brother (and thus a cute little story for people to write about without actually having to watch hockey) helped too. Everyone seems to have forgotten about Kopitar in that time; apparently, the voters for the Calder are goldfish.

I can’t possibly describe how unfair this is. I can only hope that Kopitar uses this as motivation for next year; a guy who wears #11 after 10 teams passed him by on draft day has to have a little bit of a chip on his shoulder. Jordan Staal seems like a nice kid (if a bit of a doofus), but I officially hate him.

(In a completely unrelated note, the Canucks are sponsored by Smirnoff Ice? I bet the Sedin twins were thrilled when they found out.)