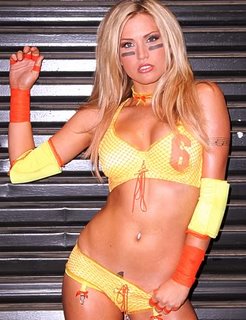 I stumbled on this (surprisingly) angry interview with Willa Ford. I could just picture Mike Modano whispering all of those things in her ear.

In fact, one part of the interview was especially amusing:

Answer from Modano in the background: You picked me up on the Internet.

Willa Ford: Yeah, I stalked him. Shut up! Oh please, you wish! Basically, we met through friends doing a charity event. So, friends set us up.

Whether the ex-pop signer was being fed everything in this interview, it still should raise some red flags for Stars fans.

Q: What was it like watching Mike play in what was the most dramatic first-round series -- that seven-game series loss to the Canucks?

A: It was tough, lots of ups and downs. There are some holes in the system when it comes to the Stars right now. There are some changes that need to be made and I think everyone is pretty aware of it. Within the coaching staff, you know that "too many cooks in the kitchen" thing; there's a bit of a struggle. One head coach is saying one thing and then you have another coach saying another. They either need to come together on that or see eye to eye because it's a little confusing to the guys, I think. This is all stuff I noticed firsthand. You can clearly see it on the ice, but when you live it like I do, it's tough. I know everything that goes on.

But here's the biggest bombshell dropped by that blonde bombshell:

" ... And last year, when they didn't make it past the first round of the playoffs, it was like, "Oh, let's throw it on Mike's back because he's the captain and make him an assistant captain now." I mean, that was the cheesiest thing. That was the most classless thing the organization has ever done."

Is it possible that a doorway into the future of Modano's career lies in what looked at first to be nothing but a puff piece?

There's clearly still some hurt feelings since Modano lost the 'C' to Brendan Morrow. We'll see if Modano ends up out of Big D.

This is the first year I wouldn't be surprised if he left.