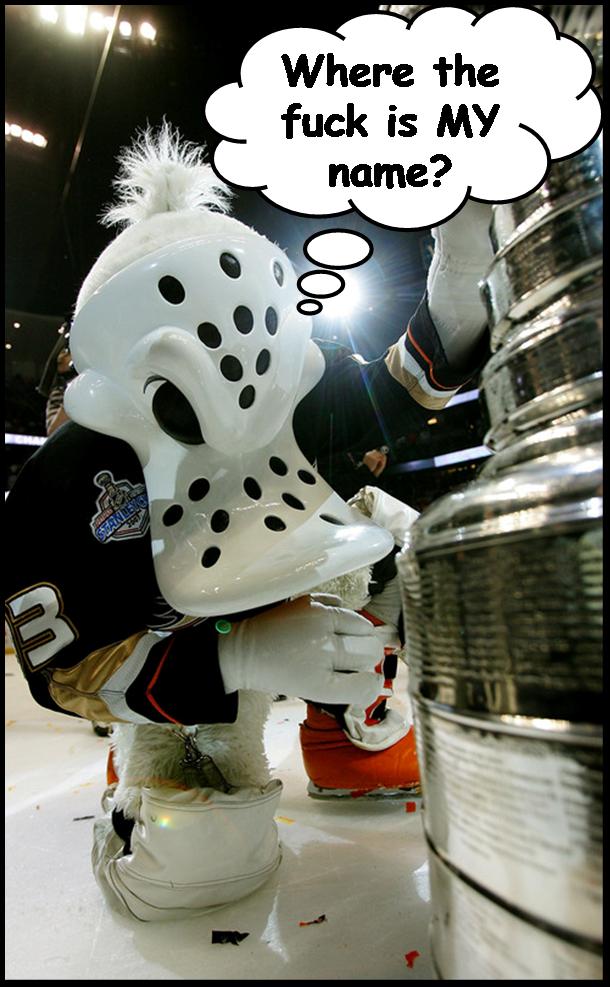 Well, lots of random items to cover this Saturday, so let's get to it:

Ducks draft C Logan MacMillan with the 19th overall pick (link).
Burke traded the 16th pick to Minnesota for the 19th and 42nd. I'm as always unsure what to think about the draft: sure it's important but it's tough to measure draft day success. Good luck, kid.

Ducks re-sign D Sean O'Donnell and D Kent Huskins for two years each (link).
This is really good news, as now a majority of the blueline will be back. Both were soon-to-be cup-winning UFAs, and came back for a cheaper combined price, which is good to hear. O'Donnell, who made $1.52 M last year, took a discount and will make $1.25 M per year. Huskins, who made $450k last year, will make $600k this year and $650 the next.

Of course, this would turn out to be FANTASTIC news if Scott decided to play another year or two, because he allows the other blueliners to play less difficult minutes. I'm hoping that the re-signings of these two and Giguere might prompt him to stay.

Ducks trade C Tim Brent to Pittsburgh for C Stephen Dixon (link).
Tim Brent played 15 games for the Ducks this year, mostly in place of an injured Todd Marchant, and was on the ice for 1 goal-for and 6 goals-against.

(Added 3:30) Ducks trade F Ryan Shannon to Vancouver for W Jason King and a conditional pick (link).
Ryan Shannon played 64 games for the Ducks this year, also mostly in a 4th line setting, and was on the ice for 19 goals-for and 21 goals-against. King has played the last three years in Sweden, and signed a contract with the Iserlohn Roosters of the German League last week, so I'm unsure whether to expect him to be available this year.

And while talking about trades in general, I do expect Brian Burke to move G Ilya Bryzgalov, but I'm not sure if Duck fans should get super-excited about the return. After watching both Toskala and Vokoun get moved for draft picks and salary relief, I'm not that sure about the market for goalies (although Breezy has less salary issues). We will see what Burke manages to do. 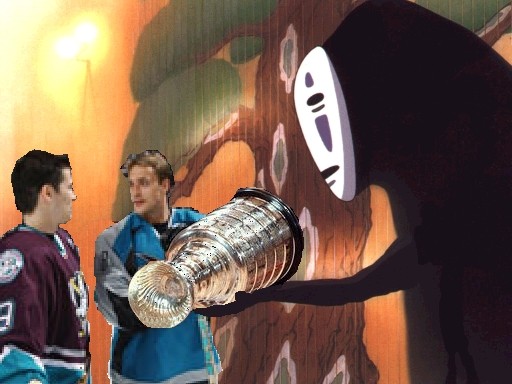 Earl answers his mail.
And finally, just for kicks, I'll take a stab at one of the anonymous comments: what would earl do if the ducks sign kariya?

The graphic to the right was one I made back in 2003 when both Kariya and Selanne turned their backs on Anaheim and signed for severe discounts to try to win a Cup in Colorado. It remains the one reason why I can't fully apologize to Edmonton fans for stealing Pronger--the same thing had happened to us three years before.

That said, unlike most Duck fans, I have never booed Kariya. Last summer, he was #2 on my list of the 10 best players to wear the Disney duck logo, and I wouldn't really have a problem if he returned (although I get the sense that Nashville, after ditching Vokoun, Timonen, and Hartnell, are preparing to re-sign Kariya).

But I got one stipulation: Kariya, want to ditch your team and sign with a contender? Fine, I won't have a problem, provided you take a salary of $1.2 M, the same price you took in Denver. Sorry, dude. Karmic Justice.