Share All sharing options for: Ducks Gameday—Experimentation in alternative media

This cartoon isn't that great, but it is my first foray into a new cartoon style: hand-drawn. I'm actually a tad rusty, but this is really how my drawing skills got started. And before now, it's gotten me no further than my high school newspaper. But, with the combination of free time and an e-mail scanner at work, the magic lives on.

At any rate, it's a cute enough picture, but the concept of it is a little shaky, in that it needs a little explanation. The Senators have had a really tough go at it in G1 and G2; several (Leafs) observers are calling it a choke job. But how much of this is really Ottawa choking, and how much of it is Anaheim's doing? 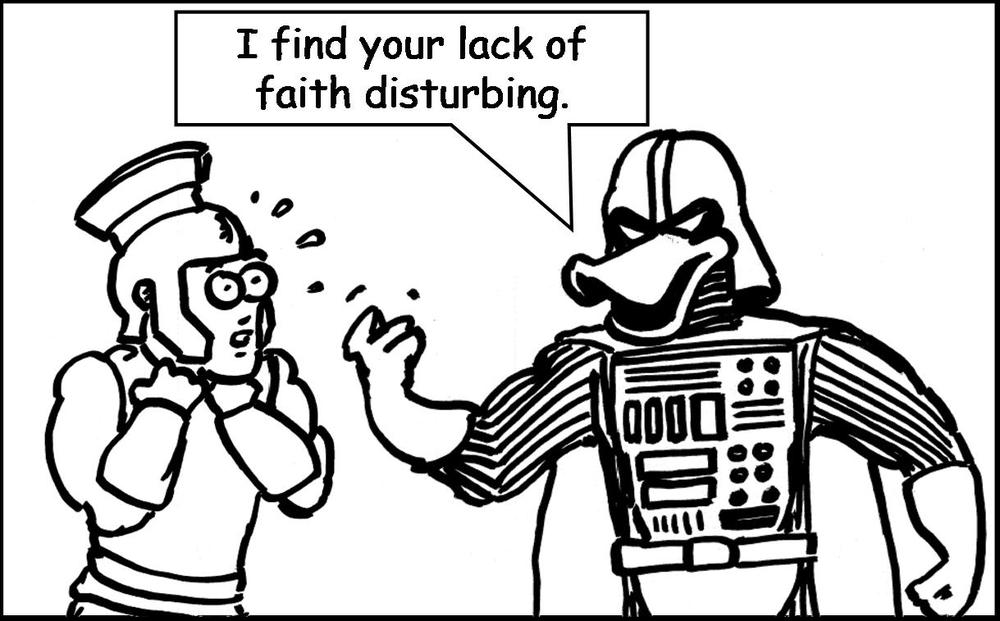 Well, anyway the technology works well enough; we'll see what I'll be producing with it later.

As for the series moving to Ottawa, well, the ball's really in Bryan Murray's court. How well can he dictate his match-ups, and will the Spalfredheat be kept intact? Trailing two games in the series, this promises to be the Senators' best effort yet, though given G1 and G2 it's not a terribly lofty statement.

For the Ducks, it will come down to taking this game just as seriously as the Ottawa players will. Executing small plays will be all the more critical, and Giguere will have to make some key saves, especially when the refs decide it's time for the Senators' minute-plus 5-on-3, a Finals fixture.

Giguere is one of six Ducks (that I can think of) who have played a SCF series to a seventh game before losing; both Niedermayers, O'Donnell, Pahlsson, and Pronger have been there also. It's really got to be the toughest loss a player can take, in that you have a glimpse of triumph but get a hard dose of bitterness instead. I also think it's a key learning experience for a player, in that it makes him reflect on not only a blown G7 but about missed opportunities earlier in the series as well. The importance of each game's result becomes more evident. Anyway, when you look at who's leading this team in this SCF series, it looks as if the G7 life lesson is paying off; these really are the guys making the victories happen for the Ducks.

Here's hoping they can do it again tonight.

Prediction: Ducks 4, Senators 2. The G7-Club leads the way again. Goals by both Niedermayers, Pahlsson, and Pronger.