Ducks Offseason: What the hell do I know?

Share All sharing options for: Ducks Offseason: What the hell do I know?

You know, I’d like to write a really good post this time of year that kind of lays out what the Ducks’ gameplan is for the offseason, but quite frankly, there’s just too many unknown factors at this point to say anything definitively. So I thought I'd just lay out all the questions I don't know the answer to, and then give a few closing thoughts at the end.

Did Dustin Penner sign a 3-year, $7 M contract? That's been the rumor floating the message boards, but I have not seen any official confirmation. The $2.33 M average would be a significant raise for the kid, as he played for league minimum ($450 k) last year. I'd say the raise is fair—he did pot 29 regular season goals in his "rookie" year.

How NHL-ready is Bobby Ryan? I barely pay any attention to prospects and minor league scoring, but I do know that this kid was the first pick Brian Burke made as a GM in the pick right behind Sidney Crosby. Should the Ducks be saving a spot on the roster for him this year?

Who is Jonas Hiller and why does he have Bryzgalov nervous? Sidearm Delivery provides a translation for Bryzgalov's quote in Sports Express: "I am sure that either I or Giguere will be leaving the club soon, since Anaheim have signed a strong Swiss keeper, Jonas Hiller. Giguere had a nice season, and I think Anaheim can sign him." Maybe another way to ask this question is: How set are the Ducks in net, even without Giguere?

What is the salary cap next year? This doesn't matter so much to the Ducks as spenders, necessarily, but it will impact the number of bidders for J.S. Giguere. While the Ducks do have exclusive negotiating rights with Giguere through June, it does feel kind of a meaningless edge; I doubt Giguere signs anywhere before this cap figure is finally released.

What will the Ducks' budget look like next year? The Ducks last year stayed well below the salary cap, thanks to a bevy of underpaid players. This year Beauchemin, Pahlsson, and Moen will get modest raises while Penner gets a significant one. Next summer Getzlaf and Perry figure to get significant raises, also. All that said, though, the Ducks enjoyed 12 extra home sellouts this spring, 4 of which were series-clinching games. Last summer they also renamed the team and redesigned the uniforms, coercing fans into purchasing all new gear. And by winning the cup, they'll benefit from champion merchandise revenue as well. By my eyes it had to be a monster year for the Ducks revenue-wise; how much of that will make its way into next year's payroll?

So, after all that, what's the right price for Giguere? Giguere went 36-10-8 in the regular season with a 2.26 GAA and a .918 sv%. In the playoffs he went 13-4 with a 1.97 GAA and a .922 sv%. And in terms of top goalie talent in the free agency pool, he's it. Giguere has indicated a preference toward staying in Anaheim, and for sure the fans love him, but what's the most that Brian Burke should be prepared to pay? 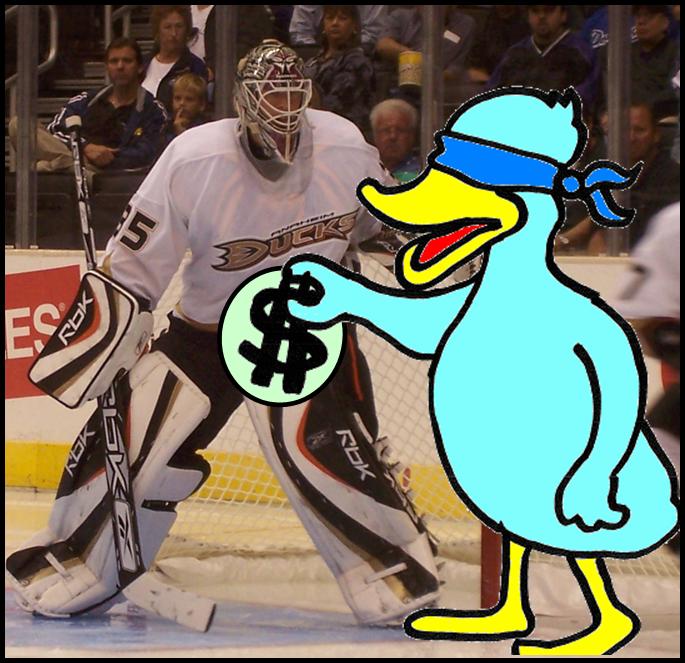 Pin the price tag on the goalie

Sleek's thoughts: Even if the Ducks lose Selanne, Niedermayer, and Giguere in the coming weeks, there is a benefit in losing 3 of the 4 highest-paid players on the team: replacement money. Using the $6 M estimate for Selanne, there would be nearly $17 M freed up to help patch the holes, and that's certainly enough money to pay some difference-makers.

At first I was worried that if Selanne and Niedermayer didn't come to a decision by July 1st, the Ducks would be in trouble missing out on first-day free agents. But then I remembered back to July 1st last year, and all the silly deals being handed out on that day, and I reconsidered. Even if there are holes that need to be filled, replacement money needn't be spent frivolously on expensive free agents. Given the choice, I'd rather see Burke fill those holes by trading with cap-tight teams.

Bottom line: there's too many unknowns here for me to do anything but "wait and see", but suffice to say I'm not that worried about the future just yet. Every one of Anaheim's potential "problems" comes with its own multi-million dollar "solution". That said, I really hope Scott in particular decides to stay, as his $6.75 M salary is looking pretty sweet compared with more recent UFA-defenseman signings (Blake, Redden, Jovanovski, Timonen), and I would like to remain spoiled by the Niedermayer-Pronger show for another year at least.

They say that Scott's got nothing left to win in hockey, but I can think of one thing he's never done. He's never won back-to-back Cups; that's gotta have some appeal, right Scott?