So, this being the most boring week of the year, and with little else to do, I figure I'd look over the ol' blog stats. As usual, the strangest numbers come from the keyword analysis, basically the search engine stats. So far, in 27 days of June, this blog was discovered by: 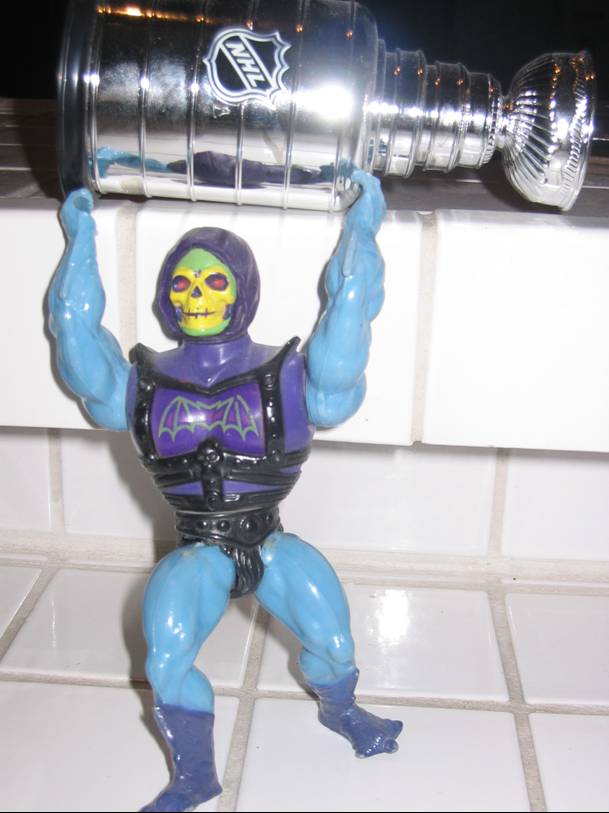 26 searches for "chris pronger skeletor"
OK man, you win. The best I can offer you is the photo to the left.

50 searches for "hedstrom ducks"
This guy appears to be more desperate. You know, the Ducks never faced a must-win game in any round these playoffs, but if they did, I was going to write a post called "Sleek's Bad Idea":

In 2003, after the second round of the playoffs, Anaheim forward Patrick Kjellberg ditched the team mid-playoffs to return to Sweden. The Mighty Ducks responded with three straight shutouts.

In 2006, late in the first round of the playoffs, Anaheim forward Jonathan Hedstrom ditched the team mid-playoffs to return to Sweden. The Mighty Ducks responded with three straight shutouts.

So if it was a do-or-die scenario, as tough as it would be, Sammy Pahlsson would have to ditch the team and head for Sweden; three straight shutouts would be certain to follow. Of course, with Pahlsson being my favorite player, I'd have to blame Brian Burke for not carrying another Swedish forward just for this sort of emergency.

And finally, 68 searches for "mathieu garon salary"
OK, Kings fan(s), we get it. We all know L.A.'s goaltending was desperately bad last year, but you gotta relax on that search engine trigger finger or you'll go crazy. Per nhlnumbers.com, Garon's salary last season was $1.216 M, but he's an unrestricted free agent come July 1st.

So relax, Kings. Your only worry should be two more years of Dan Cloutier at $3.1 M.