Share All sharing options for: Selke Trophy: Making a case against Brind’Amour 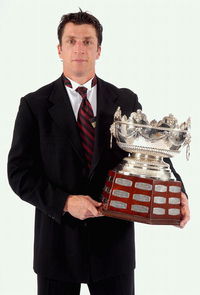 (Author’s note: well, I decided to take a week off posting after a post-heavy playoffs, but I’m back. Rudy has explained nicely how Kopitar got shafted in the Calder nominations here and here, and it’s time I finally stopped procrastinating and wrote about another bad choice—Carolina’s Rod Brind’Amour winning the Selke.)

First, let’s look at 5-on-5 play, where most of a player’s minutes are spent. First, though: what are murderer’s minutes? Well, it’s a term I just coined, but I’m using it to mean matching up against the top producer on the opponent’s roster. Playing against the Jaromir Jagrs or the Sidney Crosbys of the league—where in theory the best defensive forwards would be best utilized.

At 5-on-5, at least from these two examples, Pahlsson and Pandolfo are taking on more of the murderer’s minutes, whereas Brind’Amour is less rigorously matched.

Gabriel Desjardins’ Behind the Net site aggregates this sort of data and constructs an even-strength quality of opposition metric, a quality of linemates metric, and is able to show scoring rates with a player on the ice and when he is off the ice. These metrics are not meant to be taken as absolutes, but the do serve as an indicator of average difficulty and defensive results:

TAKEAWAY: Pahlsson and Pandolfo are playing among the toughest murderer’s minutes in the league, accompanied by some of the least productive linemates in the league: a really tough combination. Brind’Amour, by comparison, is playing less rigorous shutdown role alongside more capable linemates—his minutes are significantly easier, on average.

According to the Quality of opposition metric, six Carolina forwards played tougher even-strength minutes on average than Brind’Amour: Vasicek, Adams, Cole, LaRose, Stillman, and Whitney. And yet despite playing the 7th most difficult set of minutes on his team (a team that didn’t make the playoffs and finished in the bottom half of the league in goals-against), the Hurricanes had a better 5-on-5 goals-against rate with Brind’Amour off the ice than with Brind’Amour on the ice.

The real star in these even-strength minutes metrics is Jay Pandolfo, who despite playing very impressive murderer's minutes, still is able to demonstrate a significant defensive impact: The Devils have nearly a half-goal improvement in 5-on-5 GAA when Pandolfo is on the ice.

When it comes to shorthanded play, things become a little more clouded, as some of the same metrics are not available, and there's not always a clear breakdown of 4-on-5 vs. 3-on-5 vs. 3-on-4 minutes and results. All three Selke nominees were important fixtures on top-10 penalty kills, though, and here's what I've been able to amass: minutes played (both overall shorthanded and 4-on-5), a quality of opposition metric, a quality of teammates metric, and a 4-on-5 GAA rate while on the ice:

TAKEAWAY: Brind'Amour does look fairly good here, especially in relation to Pandolfo, but considering the number of minutes and the quality of minutes, you gotta give a nod to Pahlsson here; overall he played 65 more shorthanded minutes than did Brind'Amour and 115 more shorthanded minutes than did Pandolfo, all while maintaining pretty excellent results.

At any rate, when talking about overall performance, it's fair to say that Rod Brind'Amour (a) played significantly easier minutes than did Pandolfo or Pahlsson, and (b) despite the easier minutes, did not demonstrate a particularly strong defensive impact in the minutes he played. I think based on the even-strength results especially, he was the least deserving of the three nominees, and in fact, I probably would have given the award to (surprise!) Jay Pandolfo. He, above the others, was able to play the toughest minutes (in a higher-scoring eastern conference) and was able to demonstrably neutralize the best scorers in the league.

All that said, I fully expected Brind'Amour to take the trophy (as he did), because he was more visible, more recognizable, and carried better surface statistics than either of the other two. I'm not upset with the voting results, but I thought I'd lay out some reasons why I think the wrong choice was made.

Agree? Disagree? Let me know in the comments.