Share All sharing options for: Someone’s Gotta Make a Stand

The NHL’s weird little award show is on tonight (I’ll bet any amount of money that the Barenaked Ladies are going to be there), but I will not be watching. It’s been over a month since hockey writers made the appalling choice to nominate Jordan Staal over Anze Kopitar as NHL’s rookie of the year, but I’m still pretty pissed about it. SI’s Alan Muir (who I think is fairly solid, if a little weird-looking) agreed, stating, "…the third finalist (for the Calder) should have been Kings forward Anze Kopitar, or even San Jose's Marc-Edouard Vlasic, both of whom earned larger roles with their respective teams." 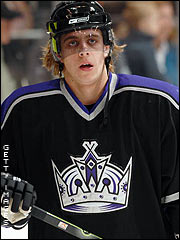 What do you mean I wasn't nominated?

As I have written before, I just can not fathom any position that justifies leaving Kopitar off the ballot and the only reason I'm the only one outraged about it is that it’s the NHL and that he plays for a west coast team that was out of contention most of the year. Probably the most annoying thing is that no one cares because it seems so natural. Why wouldn’t the Canadian guy with the famous brother who was on Versus 7 times and NBC 5 get more votes than the Slovenian kid from the team in LA? (In case you were curious, the Kings were on Versus and NBC once each.)

I know Earl’s position on this issue; he argues that he’d much rather get a level of performance worthy of an award than the award itself, and it’s a good point. But what bothers me is that people will look in 15-20 years at Staal’s career and mention how he was a finalist for the Calder trophy, while no one will remember that Kopitar should have been nominated. The problem is that when careers are evaluated, nobody remembers the extenuating circumstances of each season and all the little reasons that someone might have been over- or underrated. Instead, they just look at awards or point totals because it’s easier. The least the NHL could do is make sure those awards are accurate, so as not to deny a good kid like Anze Kopitar what he has earned.

I’m not asking anyone else to boycott these awards (besides, I think I can significantly affect Versus’ ratings by myself), and I know my reaction is over the top, but someone has to make a stand. I guess you could say that this makes me a hero, but I don’t like to think of it like that. I’m just a noble man out to preserve Kopitar’s honor. Okay, I guess I’m kind of a hero.


In other Kings’ news, Hockey’s Future has their Kings’ draft preview out, and it’s a pretty good brush-up on the Kings’ prospect situation right before the draft next Friday. Long story short, they have the Kings taking Karl Alzner, the defenseman for the Calgary Hitmen. (Oddly enough, they had the Kings taking James Van Riemsdyk when the article first went up, but they switched it about an hour later. Weird.) Who do I think the Kings should take? You’ll have to wait… (That’s called a hook, friends!)