The State of the Farm System, Part I

Share All sharing options for: The State of the Farm System, Part I 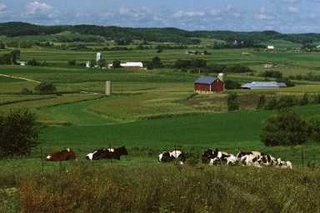 (I decided to write a post about the King's farm system; 1,700 words later, I figured that it'd be better if I split it into two parts. The next one will go up tomorrow. Be sure to check out Earl's post below, which is admittedly far better than mine.)


I know Earl could care less about prospects and all that, but when you’re a Kings fan you have to take what you can get. I know I can be somewhat negative (I think I've earned the right), but I’m very optimistic when it comes to the King’s future. The Kings farm system is in the best shape since, well, ever. There is elite talent at every position and good depth in most locations. As such, the Kings are in a unique position for a team in the draft; they are bad, but they do not really have a need because every position is in fairly good shape. (If I had to pick a position that needed help, it’d be defense, but just because there are 6 spots to fill.) I’m going to take a little jaunt through the Kings’ farm and fill you guys in on some of the highlights.


(Note: This is more of an introductory post for those who are unfamiliar with the Kings' prospect system, so if you check Hockey's Future 30 times a day like I do it might not be that informative.)


Left Wing: Patrick O’Sullivan is the top prospect on this side of the ice. O’Sullivan is a little weird for a left winger since he’s not all that defensively responsible and is known more for his scoring ability. (He’s kind of like Luc Robitaille, if you subtracted Luc’s devilish good looks and added a crazy father.) He had a little trouble adjusting to the NHL game, like many young scorers do, but he seemed to pick it up last year after he moved to the center position. It will be interesting to see if he was more comfortable carrying the puck up ice (like he did after Kopitar was injured) or if he’s just better as a center. If he’s not here, the Kings are pretty weak on the left side.

There are a couple of other prospects worth mentioning, like Scott Parse (if he signs like expected) and Matt Moulson. Parse played for Nebraska-Omaha in the NCAA for three years and was a finalist for the Hobey Baker last season. Parse is not generally rated as an elite prospect, but he just seems like one of those guys whose going to make it while more highly-touted prospects flame out. I have no real proof to back it up; it’s just a hunch. Matt Moulson is another college player who has a legitimate chance to make a difference this next season. He ended up with 57 points in 77 games last year in Manchester. Neither of these guys will be elite difference-makers in the NHL, but they are nice guys to have around because if they pan out, great, and if they don’t, oh well. Finally, Danny Roussin is a former linemate of Sidney Crosby who will probably spend the season at Manchester. He has offensive skill, but it appears likely that he won’t make too much of an impact in the NHL. Shay Stephenson is also there, but he sucks, so let’s just move on. 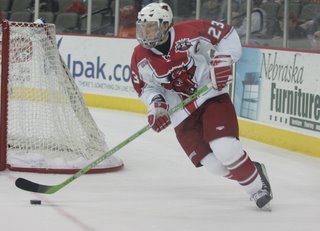 Either the NCAA uses nets that are 9-feet tall or Scott Parse is kind of short.

Center: Even though he’s no longer a prospect, one has to start any talk of Kings’ centers by mentioning Anze Kopitar. I don’t want to spend too much time on Kopitar, so let me just say that he is awesome and I love him. Behind Kopitar, the Kings have two good prospects that could fill that number 2 center spot in the years to come. First is Brian Boyle, a giant of a man who is not really known for much else. He’s not a great skater and he isn’t known for his offense prowess; he’s just fuckin’ huge. There’s talk the Kings might move him to defense, which would certainly be cool, but I would personally like to see him set up in front of the Ducks’ net, battling with Chris Pronger, and I use a lot of commas. Boyle is definitely a guy to keep on eye on, because he could either fail spectacularly or end up becoming as big an impact as Zdeno Chara. 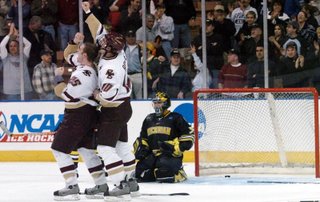 They should have asked the Michigan goalie to join, just to be nice.
The other top centerman prospect for the Kings is Trevor Lewis, who was chosen last year with the pick the Kings received from Minnesota in the Demitra trade. Lewis played in the OHL with the Owen Sound Attack and did well, scoring over a point a game. He then played a few games with Manchester and tallied 6 points in 8 games. (Small sample size and everything, but it’s a little encouraging.) Both Lewis and Boyle will likely begin the season in Manchester, but do not be surprised if either (or both) end up in LA for at least a little while next season. 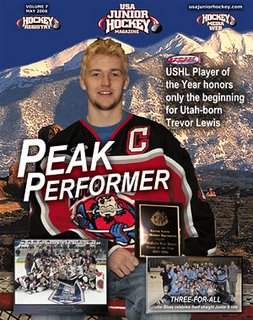 I would feel better about Lewis' chances if he didn't look like Ed Norton in "Red Dragon."


After those two, there is a pretty significant drop-off in talent. The next name is probably John Zeiller, who is 26. He might catch on with the Kings as a 4th-liner and made some fans last season with his hitting, but I don’t really like him that much. He doesn’t really have a point and I think the Kings could easily replace him. There’s also Gabe Gauthier, a California native (and from what I’ve heard a really good roller hockey player), but it’s not likely that he’ll ever be more than an answer to a trivia question.