The State of the Farm System, Part II

Share All sharing options for: The State of the Farm System, Part II

Right Wing: Right wing is probably the trickiest of the forward positions in terms of depth, but that’s alleviated by the plethora of young talent already up with the big club. Mike Cammealleri has ended up being a better player than many are willing to give him credit for and Dustin Brown made important strides in his development last season (especially after Kopitar got injured). Down on the farm the top prospect is Lauri Tukonen, the Kings’ top draft pick in 2004. Tukonen was a celebrity in his native Finland when he started playing in the men’s league as a 15 year-old and ended up becoming the youngest player to ever play for Team Finland in the World Championships. Lately, however, Tukonen has not really produced offensively, although his defensive ability is supposedly excellent. Tukonen is only 20 right now, so the Kings still have time for him to develop, but his penchant for getting injured is a little disconcerting. (He has played about 60 games each of the past two seasons in the AHL.) With Cammalleri’s contract situation looking combustible, I would feel a lot better if I knew Tukonen could be counted on. Next year will be very important for him. 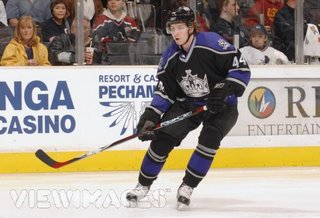 Tukonen, right before he injured something.

The Kings have two other right wing prospects that will probably be NHLers some day: Peter Kanko and Marc-Andre Cliché. Kanko kind of looks like a crazy person and plays like he really has to drop a deuce. (I swear, watch him.) He’ll probably end up being loved like Sean Avery because he’ll take dumb penalties and hurt the team, which means I won’t like him very much. Cliché, on the other hand, projects to be my favorite player on the team. He had a shoulder injury two years ago which killed his stock, but he rebounded last year to post a point-a-game in the QMDESJHL. He’s mostly known for his defensive prowess, and we learned this post-season how important having a defensive stopper can be for a team. 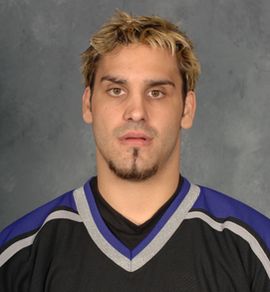 Kanko, before going on stage with Godsmack.

Defense: The defense received a big boost last year when the Kings traded for Jack Johnson. Although Johnson kind of seems like a dick, he should become an elite defenseman in the league and help the Kings for years to come and play similar to Chris Pronger. Also like Chris Pronger, I can’t see anyone liking him except for the fans of the team he’s on. All of Canada already despises Johnson because of a cheap shot during a junior tournament. It should be fun. 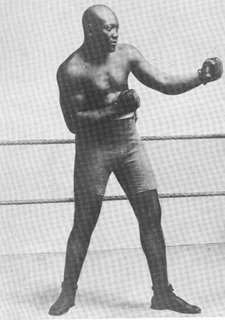 Besides Johnson, the Kings don’t have any more exceptional talent, but they have enough players that are good enough that at least one or two will stick. Richard Petiot probably would have made the team last year (saving us the indignity of playing Mike Weaver), but he hurt his knee playing in a rookie tournament and missed most of the season. Joe Ryan, Peter Harrold, Patrik Hersley, and Johan Fransson round out the list of guys who might make the team some day. Hopefully one of them can end up being a top-4 guy, or else the Kings might be in a little bit of trouble once Blake retires and Visnovsky gets traded. (I’m acting like it’s going to happen, in hopes of either jinxing it or mentally preparing myself for it.)


Goalies: All conversation of goaltending starts and ends with Jonathan Bernier. The Kings’ first-round pick in 2006 played very well with the Lewiston MAINEiacs (Cripes, that’s a stupid fucking name) but will probably stay somewhere in the QMLKJGHDJHL next season for a little more work. He’s very good side-to-side and reminds me a little of Marc-Andre Fleury in style (although maybe that’s because the both wear giant pads). The timeline for Bernier is as follows: next year in juniors, then a season in the AHL, then maybe backing up in the NHL, then hopefully starting. If he’s with the Kings in 3 years, I will be very excited. 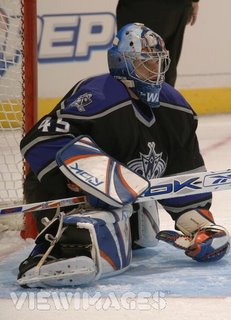 This is the most excited I've been to see someone do the splits. Well, second-most.

Okay, I guess all conversation doesn’t end with Bernier. Besides him, the Kings can look to Jeff Zatkoff and Johnathan Quick as options in the future. (Oddly enough, Johnathan Quick was drafted at the same time as defensive prospect TJ Fast. I like to think that Dave Taylor thought that if they had fleet-sounding last names, they must be fast. I was waiting for them to draft NiceSlapshot McSpeedy next.) Zatkoff was drafted last year in the third round, but rumors were that he was the 2nd goaltender on the Kings’ draft board. Knowing about Lombardi’s ability to draft goalies, I’ll just assume Zatkoff will be awesome and leave it at that. Quick is a year older and will probably reach the Kings first, but I doubt he'll be a starter in the NHL. Both of them are playing in the NCAA [Zatkoff with Miami (Ohio) and Quick with UMass], so you can watch them if you have ESPNU or live nearby.

So, that’s a (not so) brief overview of the Kings’ farm system. Overall, it’s excellent, but not perfect. A team could always use more depth because you never know when one of these kids will break their leg off or rob a bank or pursue a career in modern dance. If the Kings were to draft on need, it seems that either wings or defense would be best. Who will the Kings actually draft? To be honest, I have no idea. I’m going to pretend I do though and will bring you that article on Thursday. If you can’t wait, shoot me an e-mail; I won’t answer it, but maybe you’ll feel better.