A Vignette and Other Musings

Share All sharing options for: A Vignette and Other Musings 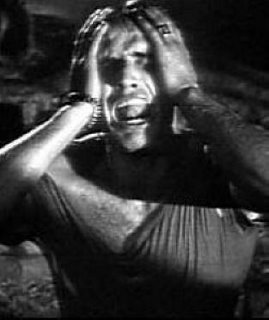 
(Rudy Kelly is sitting in front of his television, sipping a glass of white wine and watching the draft. His roommate Matt, a Ducks fan, enters.)

Rudy: Pretty much as expected, Kane, Van Riemsdyk and Turris. The Kings are up next. Don’t you love the draft?

Matt: No, the Ducks are good and just won the Stanley Cup, so I don’t give a fuck about the draft.

Co-Director of Scouting Michael Futa: With the 4th pick in the NHL draft the Kings select, from the Seattle Thunderbirds, Thomas Hickey.

Matt (Laughing): Who the fuck is Thomas Hickey?

(Rudy does not say anything but instead grabs the bottle of wine by the neck and starts drinking.)

Okay, so I was a little melodramatic when I heard who the Kings drafted. To be honest, I hadn’t really read too much on the guys that were rated below #10 because the Kings were drafting 4th. At first I was shocked and pissed and ready to kick someone’s ass (read: Lombardi’s), but with the benefit of hindsight I have come to accept the move. I wish Lombardi would have traded down and then drafted Hickey (and according to the Columbus Dispatch it almost happened), but if he felt he was the right guy then I guess we’ll just have trust him. 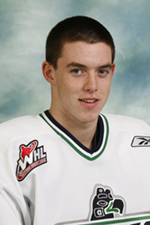 You're not helping me by looking like that, Hickey.

There’s no sense in grading a draft right after it has happened, but right now the Kings are taking a beating in early public opinion. I liked the Kings' two 2nd round picks, Oscar Moller (who seems to play like Cammalleri) and Wayne Simmonds (who’s a big guy and not afraid to drop the gloves), but the legacy of this draft will be determined by Hickey. (You can go here and read about the rest of the Kings’ draft picks.) Sometimes GMs can get so enamored with an idea of how they’ll draft that they forget to think about who they’ll draft. I hope Lombardi wasn’t sure he was going to get Hickey in the middle of the first round and then panicked when nothing developed and just took him 4th, but that’s what some people think happened. I don’t know; only time will tell.

Kings fans have shown a surprising (for us, anyway) amount of patience with Dean Lombardi so far in his tenure, but Lombardi has really hitched his star to the progress of Thomas Hickey. I like Lombardi and still think he’s on the right track, but, like in San Jose, there’s a possibility that he won’t be around to see his plan come to fruition. If Hickey stalls in his development, the vultures are going to be out and the Kings may be in the market for a new GM.

(Also, one of the conspirators who attempted to capture George Washington in 1776 was named Thomas Hickey. His was the 1st military execution in New York. This is not encouraging.)


In completely unrelated news, I’m taking a trip. The aforementioned Matt and I are taking a hajj to our personal Mecca: the Hockey Hall of Fame. We’re driving, so we’re going to be gone about 2 weeks or so and will be hitting up Denver and Pittsburgh along the way. We'll be in Toronto a few days and then head back through Canada and check out the Stampede on the way. I haven’t been to the Great White North since I was a kid, so I’m looking forward to seeing all the mountains, the culture, and the denim. Let me know if there's anything I have to see and if there's anything I should know about Canadians. 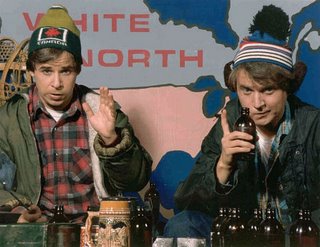 If Canadians don't all dress like this I'll be very disappointed.

This means I’ll be missing the exciting opening to Free Agency season, so I’m disappointed about that, but I’ll be back for the rest of the summer. Go Kings, and I’ll see all of you hosers in aboot two and a half weeks. (Man, Canada is going to hate me.)