So despite having a 25-year head start, the Kings will not be the first team to bring the Stanley Cup to California. We were close once (stupid McSorley, you can’t even shoot, why do you need an illegal stick?!?!?), but other than that it has been a long, tedious journey for us Kings fans. I actually thought I would be more upset that the Ducks are now Stanley Cup Champions, but I had kind of resigned myself to that fact when the Ducks went up 2-0. I guess I assumed that they'd win sooner or later, so I was ready for it. I mean, initially I felt like Ace Ventura when he finds out Einhorn is a man, but now that I've had a day to reflect I'm not too bummed. It's not like they made a miracle run like in 2003 or anything. The picture below, however, makes me want to cry: 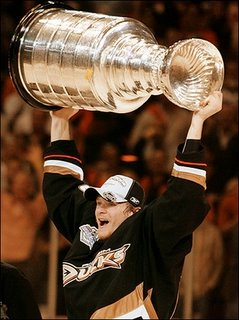 Is it possible to give the Stanley Cup to everyone but Corey Perry?
A lot has been written about how this changes the relationship between the teams in California. Thinking about it, though, I’m not sure that this really does change a whole lot. I mean it’s not like all of the sudden the Kings are now pathetic just because the Ducks won; they were pretty pathetic before that. I felt no less shame last year when the Ducks got bounced in the Western Conference finals because they could just have easily won the whole thing last year too. The Kings are still the grandfather franchise, the Ducks are still the team no one likes, and the Sharks... well, they're there, too. There’s not really much we can do but tip our caps to the Ducks and swear we’ll get them next year. (Well, maybe two years…) All I ask is that they spell "Bruce McNall" correctly when they put his name on the Cup under the people who made this possible. Don't worry Bruce, you still have your looks... oh, wait.

The good news is that now that the playoffs are over, you all are going to get a feast of Kings insights by yours truly! (Hey, where’s everybody going?) I’m planning on posting every Monday and Thursday, probably in the evenings because I’m lazy. Be sure to come back and check out player grades, analysis on free agent signings and which King I think is most likely to be gay. Don’t fret, Kings fans; the great thing about sports is that the next season begins as soon as the previous one ends. Go Kings.