The Hockey News’ Adam Proteau wrote a new article that listed the worst contracts given out this off-season. I looked forward to reading it; I love reading articles about terrible decisions by general managers. When I got to it, though, my amusement quickly turned into uncontrollable rage. Here’s what angered me so (full article found here):

"2. Lubomir Visnovsky (returning) to the L.A. Kings for 5 years and $28.25 million. I liked many of the signings GM Dean Lombardi made this summer; Brad Stuart (one year, $3.5 million) was a smaller gamble with larger upside, while Michal Handzus (four years, $16 million) and Tom Preissing (4 years, $11 million) should be valuable contributors as the Kings grow into Stanley Cup contenders.But that’s a major part of the problem I have with Visnovsky’s signing. If the nearly 31-year-old blueliner, who has missed even more games than Hamrlik (74 games) in the last five seasons, is regarded as their power-play quarterback, why sign Preissing, who excelled in the same role with Ottawa last year? And since a fair number of hockey types believe the Flyers overpaid for Kimmo Timonen, how come they aren’t looking at this deal with an equal amount of disdain?"

Lubomir Visnovsky's contract was the 2nd worst of the off-season??? Hold on, I need to take a minute… (clears throat, takes a sip of water)

How… I mean, what… I don’t even know where to begin. I feel like challenging this guy to a duel. I guess I should start by dismissing the notion that Tom Preissing comes even close to replacing Lubomir Visnovsky. Preissing is a good player, but he’s averaged 40 points the last two years; Lubo’s averaged more than 60. Besides, it’s not like you can only have one guy that’s good on the power play. I don’t even get that part. (I do like how he put in "regarded," though, insinuating that Lubo isn’t actually good at it. Very sneaky.) 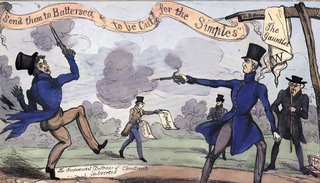 You have offended Lubo's honor, sir, and I demand satisfaction!

Over the past two seasons combined, Lubo has been outscored by Scott Niedermayer and Nicklas Lidstrom among defensemen. That’s it. His 125 points the past two years equals the totals of Sergei Gonchar ($5 million/year contract signed in 2005), Bryan McCabe ($5.8 million/year in 2006), and Sergei Zubov ($5.35 million/year contract in 2007). I don’t think Lubo can be considered inferior to any of those players. In fact, I’d argue that he’s better. I don’t see those guys playing on a team as defensively porous as the Kings and still ending up +1 on the season. Not bad for a power-play quarterback.

I also take umbrage with Proteau’s mention of Visnovsky’s propensity to miss games. It’s indeed true that Lubo has missed 74 games in the past 5 seasons; what Proteau doesn’t point out is that 59 of those games were in the three seasons before the lockout. Since hockey started again, Visnovsky has missed 15 games in two seasons. (Plus, 8 of those games were at the end of last season when the Kings were pretty much tanking, so I’m not sure if he was actually that hurt.) Sure, he gets a lot of little injuries, and that’s going to happen when you’re a 5’10", 185 pound defenseman; to act like he’s injury-prone and unreliable, though, is ignorant at best and disingenuous at worst. 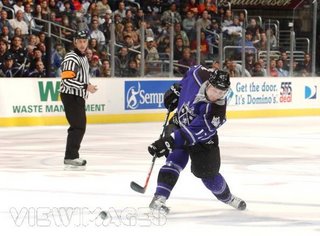 Don't worry Lubo, I got your back.


The whole thing gets even more ridiculous when you scan the article and see that Sheldon Souray was his 4th worst contract of the summer. Sheldon Souray has a very good slap shot, it’s true, but he’s pretty bad at everything else. His plus/minus? -28. I know that plus/minus is kind of a tricky barometer of a player’s worth, but you have to be pretty bad to be -28. Yet, somehow his contract is better than Lubo’s, even though they get basically the same amount of pay. sdfasdfsa…sorry, that was my hand clenching into a fist. I think I’ve got it under control now, though.

I am completely flabbergasted by this attack on Lubomir Visnovsky; who in their right mind thinks he’s not deserving of $5 ½ million dollars a year? I know he’s small and people claim that he can be pushed off the puck by a power forward, but that shouldn’t get in the way of what he’s actually done. Bottom line: Lubomir Visnovsky is almost a point-a-game defenseman that also gives you above-average defense. I'd want him on my team over all but a handful of defensemen in the NHL. Maybe Proteau just wanted to be different and that’s why he decided to go after Lubo’s contract instead of Chris Drury’s or Daniel Briere’s; maybe he thought Lubo was okay to go after because he can't speak English; maybe he’s just a dick. Whatever it was, he’s wrong.

(Oh, and the reason people don’t look at Lubo’s contract with the same amount of disdain as Timonen’s is that Timonen is getting paid $6.3 million dollars a year and isn’t as good offensively or defensively as Lubo. Just because they’re both offensively-minded defenseman from Europe doesn’t mean they’re the same, and I can’t tell you how many times that comes up.)