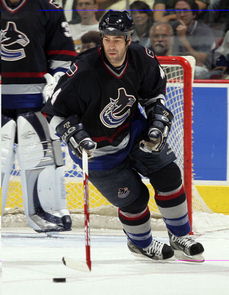 Well, if any of you Duck fans were wondering who was going to replace Brad May's suckerpunch abilities, your wait is over!

In a move that has been constantly predicted since Brian Burke took over the GM position two years ago, the Ducks signed UFA winger Todd Bertuzzi to a two-year, $8 M deal today. This of course is the 2nd straight free agent plucked from last year's Red Wings, and the 2nd straight instance where the Ducks replaced a player before they officially announced retirement.

OK, hockey-wise I am comfortable with these pick-ups; I like both players' on-ice abilities, but health is certainly going to be a factor. Contract-wise the terms are short enough but the dollars are high, which is manageable if Scott Niedermayer or Teemu Selanne decide to retire, or even moreso should both.

And that's the thing that nags me a bit—the Ducks are pro-actively solving problems that are as of yet unclear. I'm not sure how these signings will affect the decision-making of Scotty or Teemu; how will they react to being pre-emptively replaced? It certainly looks as if they are less needed than they were two days ago, and it's almost to a point where the decision to not retire creates problems. I suppose the irony is that Bertuzzi might end Selanne's career without even throwing a punch.

Speaking of which: Image-wise, if the Ducks had a problem battling a "thug" label in these past playoffs, Burke probably just exacerbated it. Now it'll be "thugs and more thugs", with Pronger and Bertuzzi generating boos across the western continent. And should either Teemu or Scotty retire, well, let's just say that's one less face of diplomacy in a Duck uniform.

Clearer thoughts to come in the next few days...

In the meantime, if you know anyone from Edmonton tomorrow who needs a good kick in the teeth, make sure to wish them a Happy Pronger Day tomorrow!