Share All sharing options for: A few more thoughts on Dustin Penner

I went home last night to think through this Penner offer sheet a bit more, but I don't think my conclusion has changed. Here are some stats I've gathered that indicate that Penner should not be Anaheim's highest paid forward next year:


All that said, I don't predict Burke very well and I don't think I'd crucify him if he decided to match. It certainly would stretch the budget thin, but despite his flaws, Penner finished second on the team in regular-season goals as a rookie, and certainly should improve his game in the coming years, especially if Bertuzzi can effectively tutor him. Next summer, re-signing Getzlaf and Perry will be a pain regardless of where Penner plays this year, but Burke has shown an ability to ditch salary capably when he's needed to.

If Burke does match, then Penner and Bertuzzi would represent the team's top two salaried forwards, which is strange since neither is naturally assured a top-line spot. I'd probably have to use this nonsense price-per-pound metric to make sense of the salary structure:
* Player weights taken from NHL.com

So I dunno, my take is still that Burke should take the picks and let the Oilers pay Penner, but I don't feel as strongly about it as I did yesterday. All offseason, I have been excited to see the first instance where Pronger throws a snapshot through a Penner-and-Bertuzzi 485-pound double-screen, so maybe that's clouding my judgment some.

In any event, I still should poke some fun at the L.A. Times online edition, who added a silly picture-question to their Penner story: 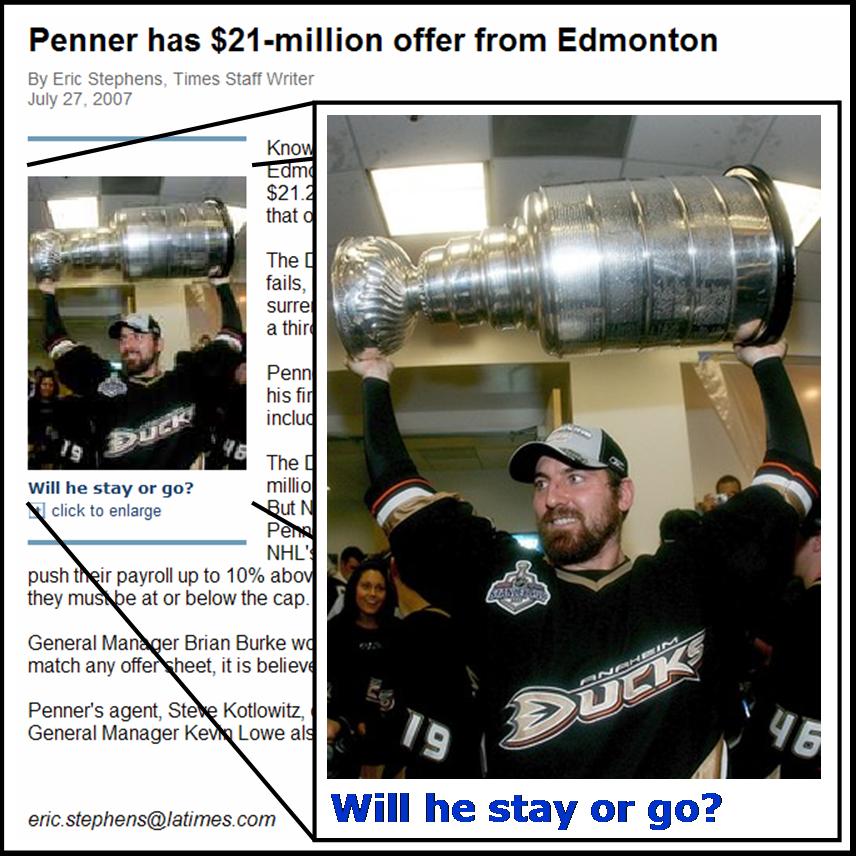 Uh, nice proofreading, guys, but I'm going to go out on a limb and predict that Francois Beauchemin stays...