A lot of people in the hockey world complain that the hockey season is too long.They complain that by the time a champion has been crowned, it’s June and most people haven’t seen snow or ice in a couple of months. Every year there’s an article about how the season should be cut down to 72 games, or 60, or 10; I say fuck that noise. I believe just the opposite; the season needs to be at least 10 games longer.

Why must the season be lengthened, you ask? Well, for one, we need hockey. If you follow hockey every other sport seems to be played in slow motion. I mean, sure, I like baseball, but have you ever tried to watch a game from beginning to end? It’s like watching a hockey game, but if every player was Chris Chelios. Some people might get burned out by all that hockey; I call those people pussies. Think about it: if the season went until the middle of July, we’d have the rest of July and August to do the draft and free-agency, and then bam, pre-season.

Thirdly, we’d see more teams. Imagine if they added 18 games to the schedule, bringing the season up to 100 games. Along with all the Western Conference games that we already see, those 18 games can be used to give the fans more games against Eastern Conference opponents. I don’t know about you, but I’d much rather see Sidney Crosby and Ilya Kovalchuk once than Keith Ballard for the 8th time. 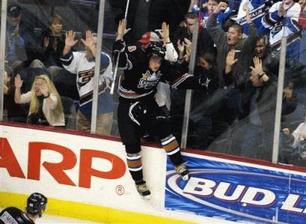 You don't think he could play another 10 games?

Some people might argue that the players would be tired and beaten down if the season were that long, to which I reply: fuck ‘em. They get paid millions of dollars to play a kid’s game; they can handle a little pain. I don’t get 3 months a year off for my shit job, so why should they? If anything, it’d cut out the weaklings (read: Europeans) and we’d get real men playing again. Besides, tennis players, golfers, and NASCAR drivers go all season, so why shouldn’t hockey players?

So there you have it. A longer season equals more hockey, therefore my argument is infallible. For those of you who still disagree, think about this: if the season was longer, you wouldn’t get stupid articles like this one