More Thoughts on the Kings Roster

Share All sharing options for: More Thoughts on the Kings Roster

In my last post, I jotted down some line-up combos off the top of my head that in retrospect I don’t agree with. Just to refresh your memory, I put:


Looking back on it, I think I was a little irresponsible in throwing line-ups out there without justifying my reasoning for them at all. I think Marc Crawford will switch to more of a run ‘n gun style this season, like the teams he had in Colorado and Vancouver, meaning that he’s more likely to have three scoring lines and one stopper line. I made our old lines trying to build a team more in the Anaheim/boring mold, with two scoring lines, a stopper line and a line that sucks. Unfortunately, we don’t have enough lumbering brutes on our team, so that system doesn’t really work. (We also don’t have a Stanley Cup. Ha, you can’t make the joke if I’ve already made it!)
I think it’s safe to assume that Nagy and Handzus are going to play together, since the reason they came to L.A. was to be on the same team. They seem like they’d work well together, anyway, so that’s cool with me. Since Nagy’s a left wing, that means Frolov would have to play with Kopitar (unless someone wants to put one of them on the third line, and if that’s the case I’d like to meet you so I can put a hatchet in your face).
I had Cammalleri playing with Frolov and Kopitar, but I actually think he’d be better off playing with Nagy and Handzus, since neither Nagy nor Handzus are known for goal scoring. Having Cammy sniping on that line gives me the kind of dreams where I have to lie and tell my roommate that I spilled water on my bed. That means Brown is playing with Kopitar and Frolov. I hope he’s happy not touching the puck. 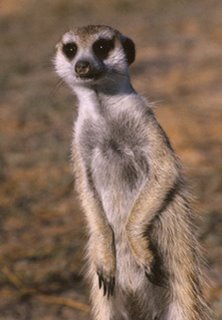 I couldn't think of a picture that went with this post, so here's a meerkat.


The bottom lines are little harder to determine because the personnel does match up that well. Some people are content with throwing out a third line that is centered by Armstrong with Calder on the left and O’Sullivan on the right, but I don’t like the idea of switching O’Sullivan to another forward position while he’s trying to develop. Playing left wing is different from playing the other two forward positions and I think it'd hinder his development to move him to his third position in the last three years. Calder is perfect for the third line, so I don’t want to switch him. The other option is to move O’Sullivan to center and dropping Armstrong down, which I want to avoid because that makes what I wrote here true. Plus, I'd hate to have Brian Willsie on the third line because he, well, Willsie sucks. I'm sorry, but it's true.

Where does that leave us? I don’t know fore sure, but I’ll tell you what I’d be willing to live with now that I’ve had a while to reflect on it:


This gives us three lines that can score and one line that can easily be replaced as the younger guys come up. About Tukonen, I think he’s one of those guys who comes out of nowhere and impresses people. He has the talent but has been beset by injuries recently; if he’s healthy this year, he could be one of those surprises that can solve a lot of problems for the Kings. As for the older guys on the fourth line, I figure if they’re going to be on the team I should at least lump them together and isolate their suckiness before it infects the younger guys.

Of course, all of this is moot because Handzus is going to break his neck and Nagy is going to come down with Hodgkin’s, but that’s what I’d like to see in London. What do you guys think? Let me know in the comments, so I can read it and then purse my lips and mumble, "Well, obviously he doesn’t get it."