I have an unhealthy obsession with finding slights against the Kings and then railing against them. One such slight? The exclusion of Alexander Frolov in last year’s All-Star Game. Frolov was one of the better players in the Western Conference leading up to the All-Star break, tallying 45 points in 46 games. That put him 5th in the Western Conference in points and first among left wingers, yet he was passed over by Jonathan Cheechoo (who got in thanks to the powerful San Jose lobby), Ryan Smyth, Rick Nash, and handsome devil Henrik Zetterberg. It is my belief that Frolov deserved to be in the All-Star game over at least one (if not all) of these players.


A rudimentary analysis of the statistics at the All-Star break makes it obvious (at least to me) that Frolov deserved to be in the All-Star game. Ryan Smyth is the only player that came even close to matching Frolov’s production. At first I figured that they had to get a player on every team in the All-Star game, but then I was reminded that they did away with that rule about 4 years ago. Nash’s inclusion was particularly egregious. I mean, sure, he led the league in goals a couple of years ago, but that has nothing to do with this season. If I had been writing for this site when this happened, the whole thing might have caught on fire. 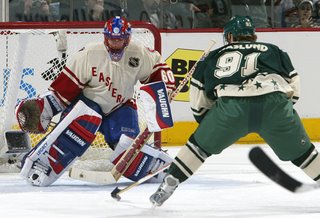 
Some might argue that maybe the NHL didn’t include Frolov because the Kings already had Visnovsky going to the All-Star game and it wouldn’t make sense for a team as bad as the Kings to have two players in the game. To them, I say go fuck yourself. The All-Star game is not a reward for teams that have excelled in the first half of the season; it is a place for players who have had exceptional seasons (like Frolov) to be honored.

Sorry, I got lost in your eyes for a second. What was I talking about?

I think a problem with the Kings is that because the team is bad, people just automatically assume that they don’t have any good players. This leads to Frolov being excluded from the All-Star game, and Kopitar being excluded from the Calder, and shitfucks writing about how Visnovsky doesn’t deserve top defenseman money. I think you need to watch this team to understand that the best players on the team (the three above plus Cammalleri) are all very, very good; it’s the rest of the team that ain’t that great. Of course, that would mean that the NHL and the writers would have to stay up past 11, and that’s just asking far too much. I mean, come on, it’s not like it’s their jobs or anything.