Share All sharing options for: Sleek’s crazy letter to Burke

I don’t know if you know me from a hole-in-the-wall, but I’m the jerkass who’s been blogging on the Ducks for the past year or so here at BoC. Congrats certainly on the cup win, and good luck this summer on dealing with Niedermayer & Selanne’s ceremonious non-retirements (please please please!) and the cap juggling that is certain to follow.

At any rate, I’ve had a crazy idea that I wanted to float past you—take it for what it’s worth. What’s crazy about it is that this idea is inspired by Charles Wang and his circus Islander show, back when they signed goalie Rick DiPietro to a 15-year deal ($4.5 M/yr) last summer. In listening to the ensuing debate about the insanity of that deal, some arguments were compelling about the (gasp!) salary cap merits of a 15-year deal, particularly those of my blog-hero Tom Benjamin:

"As long as Wang is prepared to spend more than what he is allowed to spend under this CBA - almost certainly the case - the Islanders are in good shape with this contract… If the worst happens, Charles Wang has the most expensive goalie in the AHL. His contract will always clear waivers. The Islanders will always be able to create cap space by demoting him. That's flexibility."

I’m not completely sold on this—it still has the feel of a rich man’s gamble to it—but I think there is some merit to the idea, provided the commitment is to the right player. But what constitutes 'the right player'? As I wrote last year, I don’t think the right player should be a goaltender: it’s regularly the position with the most available free agent talent. 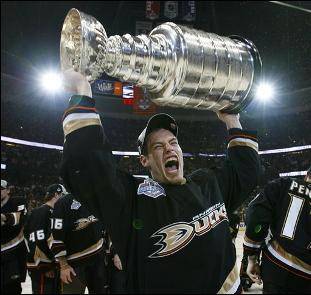 But what about Ryan Getzlaf?

Now Getzlaf is under contract next season for $623,200 (NHLSCAP.com), and will be a restricted free agent next summer (along with Corey Perry). They both will be due sizable raises at that point, but at least a top-end precedent has been set (S. Crosby, 5 yrs, $8.7 M/yr). Getzlaf's combination of size, skill, youth, and experience is pretty rare in this new-era NHL, and so far, there's nothing to suggest that he wouldn't be an ideal candidate for Anaheim's franchise player, no matter what sort of game the NHL evolves into.

Sure there are downsides—who knows how a longterm deal might affect his attitude, and historically the Ducks have not been a "rich" team that typically makes these types of risks, but if we look closer at when the gamble really takes place, maybe it becomes more stomachable. Really, the gamble is not so much in the first 10 years or so of the contract—all signs point to Getzlaf being a dominant enough player over that stage of his career. The downside probably comes at the latter end of the megacontract—will his skills diminish to the point where his salary needs to be hidden in the minors, and will the Ducks ten years from now be a team that can afford to do this? (Anyway, if it does turn out to be a mess, likely it will be someone else's job to work around the cap headache, not yours.)

The upsides, depending on the dollars, could be really beneficial. Remember, Getzlaf did lead this team in postseason scoring, and if he could be secured long-term for an under-market average salary, the franchise could have a strong salary cap advantage for a full decade or more. Also, in this era of player movement, a true franchise player-for-life is a real rarity, something that Anaheim fans could really embrace.

At any rate, Mr. Burke, by winning the cup you have earned yourself a lot of leeway as general manager—not many in your position probably have the freedom to do something this gutsy or maniacal. I have heard grumblings about the NHL possibly doing away with this sort of contract length (which further suggests that there are cap advantages), so the window of opportunity for this crazy scheme might be closing. Also, there's no guarantee that this sort of deal-structuring appeals to Getzlaf (or more importantly, his agent) at all.

Any way, this letter is getting way too long and self-linking, so I’ll just leave it up to you. There really is no ultimatum here, just some salary cap food-for-thought. I don’t want to get petty about the specific numbers, but if there are longterm cap advantages to be had, is Ryan Getzlaf the right player to take a career cap gamble on, or have I gone completely insane?

Commenters can confirm or deny my insanity below. 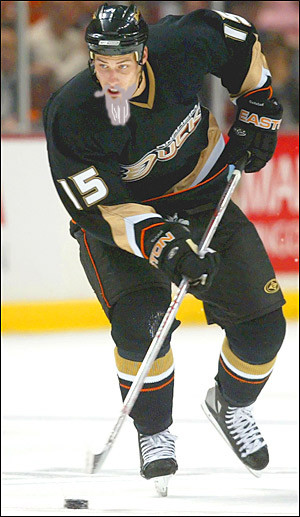