I used to get very upset whenever someone brought up Mike Cammalleri. I was constantly told that he was too small, or too slow, or too black to make the NHL. (That last one, well, I’m not sure what that guy was talking about.) The conventional wisdom against Cammalleri was that he would never become a good hockey player, but I kept looking at his stats through the years and seeing the progression of a player who would one day become a very good player in the NHL. I was confused; why was Dustin Brown getting a free pass as he struggled to adjust to the NHL style of play while Cammalleri was constantly being maligned any time he had a hiccup? 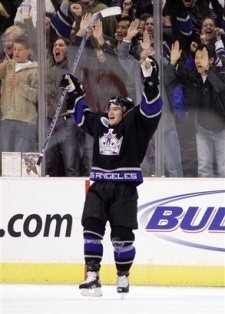 I was proud last year when Cammalleri had his break-out season and I’m sure it felt good for him to finally prove his critics wrong. But now there’s a new problem: Cammy has gone from being woefully underrated to being slightly overrated, mostly by himself and his agent. Is Cammalleri our best offensive player? Yes. Will he be our best offensive player in two years, and then farther down the line? Probably not. By then, either Frolov will have finally gotten his shit together or Kopitar will have continued being awesome, and Cammy will no longer be our go-to guy. There's a big difference between being an elite player and being the best player on a bad team, and I'm not sure if Cammalleri knows that. 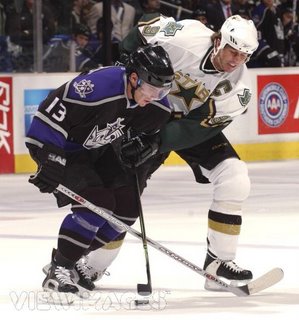 Apparently, Mike Modano can morph into a giant.

This leaves Dean Lombardi in a unique and unfortunate situation. Cammy wants to be paid like a franchise player, and he is our franchise player this upcoming season. However, the Kings aren’t going to win a Stanley Cup if our best offensive player is Cammy; they either need several very good players (who are all paid less than franchise money) or they need one player who is elite (like both Eric Staal and Teemu Selanne were for their teams). I don’t think Cammy is that player.

Cammy’s arbitration hearing comes up August 2nd and it doesn’t look like the Kings and him are close to agreeing on a long-term deal before then. If he does go to arbitration, I think it’s likely that he’ll be awarded a salary somewhere in the $4.5-5 million range. (That’s more than Patrick Marleau makes.) If this happens, I think the Kings will sign Cammalleri for this upcoming season. If Cammy proves that he’s worth franchise money, then Lombardi should sign him to a long-term contract. If he proves to be a good offensive player that wants elite player money, then I think the Kings trade him to a team that desperately needs talent. (I'd mention Edmonton by name, but I think that'd be too cruel to send him there.) Neither situation is great, but that’s life in the NHL.

I don't know, that's what it seems like to me.I like Cammalleri, but I don’t know if I’d pay him big money if it means that I can’t pay Kopitar and Frolov in the future.


Canadians, you really need to learn how to get in trouble if you're a professional athlete. Steroids? Pretty good. Throwing games because you work for the mob? Excellent. Dog fighting? Ingenious! Getting arrested because you were yelling at cars on the road? Not that dangerous, and actually kind of embarrassing. Couldn't they at least killed a hooker or something? And where was Marc Staal?