Share All sharing options for: When I Was Young...

When I was young, my favorite player was Kelly Hrudey. He had everything a kid could want: he played the same position I did, he had a cool helmet, he wore a bandana that made him look like a pirate, and he had a name that was mine but switched around. (Funny how that works…) He was not the greatest goalie that ever played, but he was good enough and he was a hero to me. 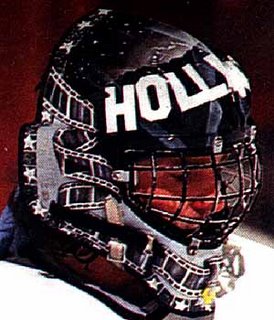 I always wanted him to wear a helmet with a bandana painted on it.

When he left the Kings in 1996 and signed with the Sharks, I was devastated. How could the Kings not want Kelly Hrudey anymore? I mean, seriously, he looked like a pirate. To make matters worse, I went to Hrudey’s first game back against the Kings and had to suffer through the vile insults of angry Kings fans towards my hero. It seemed insane to me that fans could jeer and boo a guy who had led them to the Stanley Cup Finals and, again, looked like a pirate. The Sharks won (7-6, which probably explained why the Kings had let him go), but that was little consolation for a young man. From that time on, I swore that I’d never have a favorite player again.

Through the years, I’d have players that I enjoyed watching (Ziggy Palffy) and players that I rooted for (Steven Reinprecht), but I never had a player that I cheered for specifically. That all changed, however, during the first game of the 2005-06 season. The Kings were playing the Phoenix Coyotes on October 6th, the first home game of the year. They led 3-2 in the closing moments of the third period, but then disaster struck. Pavol Demitra was given a two-minute penalty for tripping and then Tim Gleason received a penalty for cross-checking. This put the Kings down 5-on-3, and then 6-on-3 when Phoenix pulled their goalie. The situation seemed hopeless, but the Kings center managed to win the face-off to himself and then draw a penalty, effectively saving the Kings. That center was Craig Conroy.

You not only stole that puck; you stole my heart.

I tried not to fall for Craig Conroy, but I was soon smitten. He had everything I looked for in a player; solid play-making ability, defensive responsibility, and a smile that rivals the Sun. He played in every situation with the grit and talent that every player should desire. Even more importantly, he seemed like a great guy to have a beer with, a guy that would reach out to young guys and show them the ropes. That whole season Conroy grew and grew on me, until I finally began to think of him in the same way I thought of Kelly Hrudey. Conroy ended up with 66 points in 78 games and our future together looked bright.

Unfortunately, nothing went right for Conroy after that season. His linemate Pavol Demitra got traded and the loss of Alyn McCauley meant that Conroy had to take on the task of shutting down the opposition. He devoted himself to this 3rd-line role with the same resolve that he did to everything, but the results just weren’t there. Kings fans began to turn on him the same way that they had turned on Hrudey, and I was forced to face the loss of my favorite player once again. Things turned out well with Conroy; he was reunited with Calgary, his former team, and showed the flashes of what had made me like him in the first place.

I know it’s dumb for a grown man to bemoan the loss of a hockey player that he’s never met and I often mock those who devote themselves wholly to one player. After Craig left, I decided that it was much more important to advocate what was the best for the team and look to the players as interchangeable parts. It is the most logical thing to do, but at the same time I feel that I don't get as emotionally invested as I used to. There’s something to be said for having a favorite player, and it's sad that I'll most likely never experience that again. I may understand more about hockey and appreciate its intricacies more than when I was a young man, but there are times I wish I could still feel the way I did about Kelly Hrudey and Craig Conroy.