Kunitz, the scoring "enabler", gets extended

Share All sharing options for: Kunitz, the scoring "enabler", gets extended 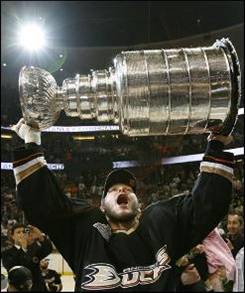 I’m fairly happy with this signing, though I will note that it is a bit difficult to peg a value on Kunitz’s contributions. After all, Kunitz is rarely the opponent’s focal point on any of his line combinations. But whereas some players are purely "passengers" on scoring lines, Kunitz is more of an "enabler"—he noticeably improves scoring results around him.

To demonstrate this, I stole some numbers from an even-strength teammate evaluation site created by HockeyAnalysis.com’s David Johnson. Basically, this site looks at last season’s even-strength ice time and determines scoring rates (GF and GA) when certain players play together and when they play apart. Below are the top 4 forwards and the top 4 defensemen that Chris Kunitz played with at even-strength last year. Note how all 8 players had improved results playing with Kunitz compared to their even-strength ice time without him.


Even-Strength Goal-Differential Rates
GF, GA, and GD with and without Chris Kunitz

(note: all scoring rates are expressed as goals per 20 even-strength minutes)

The defenseman results in the table above aren’t really that telling—after all, their minutes played with Kunitz mostly correspond with their minutes played with the top line. But the forward results are very revealing—the top two lines were both much more dangerous with Kunitz as the third option. His abilities to skate, shoot, and play the body provide enough options and flexibility for scoring lines to thrive. As Brian Burke notes, "He’s one of our Swiss army knives. He’s good enough to play on the top line and tough enough to play on the fourth line. And he can do almost anything in between."

All told, I am happy enough with the extension, which I should note is at the "Burke Maximum"—four years. Burke has not negotiated or acquired any contracts extending beyond four years, which I approve of to stay flexible in the face of a vaguely predictible future.

For those who have not heard it, PJ at Sharkspage has linked to what might be the definitive Battle of California theme song to date—The Whiskey Avengers’ single "Cheechoo / Tameu", which despite its spelling error in the title quite hilariously tells the story of California’s purest goal scorers—SJ’s Jonathan Cheechoo and Anaheim’s Teemu Selanne.

Check it out now before retirement renders it obsolete!