Share All sharing options for: League-wide scoring trends are depressing

The league projects out to score 1300 more goals this season. That's 104 more goals on the shootout, 1068 more goals on the power play, and 44 more goals shorthanded. If present trends continue, we can expect over the course of the season to see a total of 84 more even strength goals than we saw in 2003-04.

...79% of the scoring increase this season is attributable to special teams goals, and 21% is attributable to even strength goals. Regardless of whether you are happy or unhappy about this, those are somewhat jarring numbers. ...Make of it what you want. I simply think that if we're going to evaluate the changes in the game, it's nice to know just what we're talking about.

If the players can adjust to the new rules and play penalty free, the game would still be left as a higher scoring one, albeit marginally so. Whether it was worth the cost is probably in the eye of the beholder—the change in ES scoring on a per game basis this year is so small as to be almost unnoticeable—it’s like the difference between a 15 goal scorer and a 23 scorer.

There are certainly other hockey bloggers who have written about the NHL's post-lockout scoring increase and its power play dependency, but I think these three guys have addressed it as well as anybody. Well, now that we're two full seasons into the New NHL™, I figured I'd take a graphical look at the goals-per-game trends across the league. The chart below takes the last two seasons and splits them into 27 weeks each. For each week (roughly 45 games per week), I have plotted three statistics:

The first two are fairly self-explanatory, and as for the 1/6 factor on the power play opportunities, it really is meant to convey a pretty static power play conversion rate over the two-year span. I have added straight-line trendlines to the chart, and note how well this 1/6 approximation mirrors actual power-play scoring. 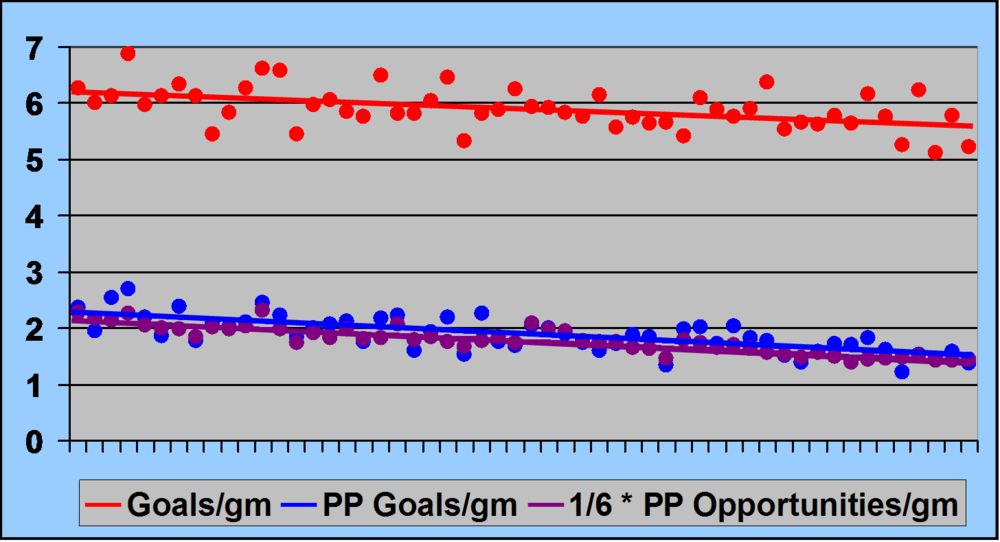 According to the trendlines, overall scoring has fairly steadily decreased since the lockout, and the cause of it looks straightforward—there has been a steady decrease in power plays and thus a steady decrease in power play goals. Whether you want to attribute this power play decline to slipping standards or player adjustments, the point really is that the NHL's primary mechanism for increased scoring is disappearing.

Now I'm not really a guy who subscribes to the "more goals equals more excitement" school of thought—as a matter of fact, probably some of the most boring hockey in my opinion is penalty-parade hockey (it not only kills the flow of a game, but there's only so much no-hit, set-play, ice-the-puck, play-in-one-zone time that I can tolerate). Whether the game is more exciting now than the pre-lockout NHL I'll leave to the reader, but as salaries and scoring rates gravitate back to pre-lockout levels, one has to wonder how meaningful the lockout really was and whether it could happen again.