Share All sharing options for: Re-designing jerseys: the new expansion? 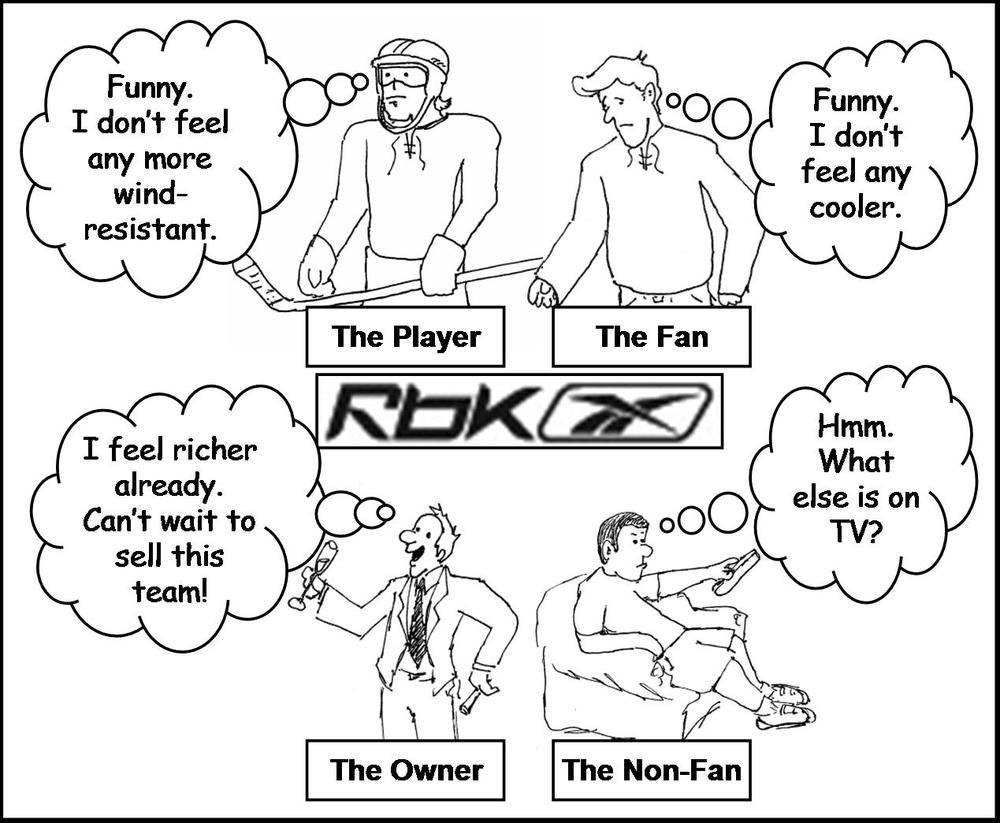 I'm not sure how everyone else feels about the Reebokification of hockey sweaters, but as a fan who's team underwent a jersey and logo re-design just a summer ago, I'll say that I'm pretty disillusioned about the development. Not only does it seem to be a meaningless move in terms of improving the on-ice product, but it stinks pretty much of a cash grab.

I'm calling it "the new expansion" because the revenue ramifications worry me: owners obviously like re-designs because it's a pretty easy way to make a cheap buck, forcing their fans to buy into a new look. And sure, there's nothing wrong with doing that once in a while. But I don't really trust the NHL to treat these one-time revenue streams appropriately. Before the lockout, expansion fees were another one-time revenue source that really escalated the league's spending appetite, but once that revenue stream dried up, all that remained was an unsustainable salary structure. Nowadays, with salaries linked to revenues, the dangers are different, but I worry about contract commitments made after a year with artificially high revenues (under an artificially high salary cap).

From an Anaheim fan's perspective, I'm getting sick of these re-inventions. Three seasons ago the team wore white Mighty Duck jerseys at home. Two seasons ago they switched to dark-at-home and introduced a 3rd jersey. Last season the team re-designed its team name and logo for a brand-new look, and next season it will convert to Reebok-style fitted jerseys. While I'm sure that each year's sweater development has earned the franchise tons of money, I think the market is shrinking for jerseys with a one-year shelf life. Be warned, NHL. You may have found a nice trick to scrape together some quick cash, but like expansion fees, I don't think the boost is sustainable. If and when it loses its steam, I really hope you're not planning on making up the revenue on already-high ticket prices.

Readers: If you are curious about these new uniform developments (and yeah, it is still kind of exciting), check out NHL Tournament of Logos, who's doing a great job of keeping track of all the league's changes.

Meanwhile, in other BoC news: