Sharks fans like their beer fresh, and their Pronger flat? 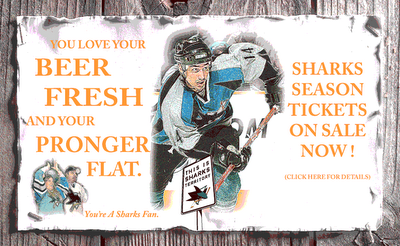 Interesting advertisement from the Sharks marketing department. You might be a Sharks fan if... you like your beer fresh (check), your Pronger flat (check), you imitate a Latvian accent when you say 'Like Wall' (check), you have a pavlovian response to boo anything with the words 'Los Angeles' in it (check), you are still in denial and waiting for upcoming league nullification of Anaheim's "Mighty" Stanley Cup run (check).

But this advertisement makes one wonder, is the marketing department writing checks that the players on the ice can't cash? Mark Bell tried to flatten Shane O'Brien last season. Scott Parker did flatten George Parros with a 2-punch knockout. Ryane Clowe and Shawn Thornton unsuccessfully tried to flatten each other at the Honda Center regular season finale.

Throughout the intra-state rivalry, Chris Pronger remained relatively unflattened. Will it change this season? The San Jose Sharks marketing department believes so.