That's the Sound of No One Caring

Share All sharing options for: That's the Sound of No One Caring

Oleg Tverdovsky, the well-traveled defenseman once hailed as the "Ukranian Bobby Orr," looks to be taking his puck and going home. Russian newspapers are reporting that Tverdovsky has signed a 5-year deal with Yulaev of the RSL after realizing that there was no way he was going to play for the Kings this year. He’ll probably say that he missed his family and wanted to be back in Russia, which we all know is bullshit because no one wants to spend a winter in Russia (except maybe Ilya Brzyzgalov, but he's insane). 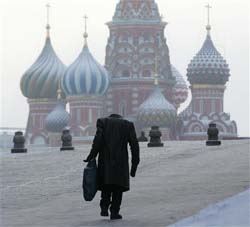 It's so cold that guy's head fell off!

This is good news for the Kings because it means Tverdovsky’s $2.5 million dollar contract comes off the books; the Kings probably won’t spend any more money, but it’s nice to have in case they want to pick someone up for the stretch run. And I’m sure Carolina GM Jim Rutherford is cursing the heavens, wondering why Tverdovsky didn’t do this earlier. In the end, the Kings traded Eric Belanger and Tim Gleason for Jack Johnson and $2.5 million dollars (since Tverdovsky barely played for the Kings). Belanger was later traded for Josef Vasicek and the Canes have since indicated that they won’t re-sign him. Going forward, this essentially makes that trade Jack Johnson for Tim Gleason. To the Canes, I say: whoops. 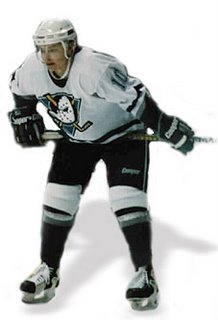 Earl Sleek is now curled into a ball, muttering, "No, no..."

With the NHL career of Oleg Tverdovsky essentially over, I think we should all take a moment to reflect on an, uhh, interesting career. Tverdovsky was drafted 2nd overall in the 1994 NHL entry draft by the Anaheim Ducks. (I was going to point out what a terrible pick that was, but the Kings drafted Jamie Storr 7th, so I’ll shut up.) Tverdovsky was always a 4th forward out there, but his unique defensive play (ie., letting people skate right by him) made it difficult for any team to handle him for more than a couple of years. He bounced from Anaheim, to Phoenix, back to Anaheim, to New Jersey, to Russia, to Carolina, and finally to the Kings. I didn’t really get to know him while he was on the Kings so I don’t have any great stories about him. I call on Ducks fans to please share their favorite (or most infuriating) Tverdovsky moment if it’s not too painful. So long, Oleg. I hardly knew ye, thank God.

(P.S. Please refrain from calling him "Turn-overdovsky." If I hear one more person call him that, the hilarity of the phrase might actually make my sides split.)

(P.P.S On the pre-show for the Dodgers game, Steve Lyons said that Reds pitcher Phil Dumatrait "…got whacked around in his last start." Teehee.)