These Are The Things I Think About

Share All sharing options for: These Are The Things I Think About

Why don’t players who get a penalty get a minus if the other team scores?
This has been bothering me for a while. I understand why a defensive player on a penalty kill shouldn’t be subject to a minus because it’s not his fault, but isn’t it the fault of the guy who got the penalty in the first place? If he hadn’t committed a penalty, they wouldn’t have had the scoring opportunity. It makes more sense for that guy to get a minus as opposed to the guy who jumped on the ice two seconds before the goal was scored. I understand some problems along with this: they don’t give a plus to people who draw a penalty (if they did, Patrick Marleau would lead the league every year), and it might overly punish players with poor goaltending. It would punish guys like Matthew Barnaby and Sean Avery (although Avery does draw a lot of penalties too) for their antics, though. I don’t know, what do you guys think? 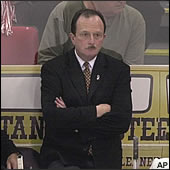 Dave Lewis was hired as an assistant coach for the Kings a couple of days ago. My opinion of coaches is that they’re not that important in the grand scheme of things except for power play coaches, but Dave Lewis is known as a pretty good guy and he should balance Marc Crawford’s dickery. I would be a little worried if I were Lubomir Visnovsky, though; he might wake up tomorrow and find out that Lewis has annexed his house.

I’m getting all set up for season previews, starting next week. I’m going to start with the guys who are guaranteed make the team. First up: Rob Blake. Last season was a while ago, though, so my memory is a little hazy. If you have any stories from last year about Blake, or just general impressions of his play, please leave them in the comments. Otherwise, I’m just going to write about the size of his ass for 20 minutes, and nobody wants that.