Earl Sleek: the model of Londifference

Share All sharing options for: Earl Sleek: the model of Londifference

As the Ducks and Kings finish preparing for actual games this weekend, I thought I’d devote a post to the apparent problems of having two BoC teams starting their season in London. This is not to say that there won’t be any positives to these two teams taking the trip—but without knowing what the actual point of this Euro-experiment is, it’s tough to say how well the NHL did in its preparations. Anyway, here’s four reasons why the NHL’s decision-making seems odd to me.

1. Distance
In terms of miles traveled, the Ducks and Kings are the two most geographically distant NHL cities from London, England. It’s quite strange that the NHL would take its two furthest franchises and fly them 5,400 miles out of their way to start their season. But travel distance isn’t even the main concern here—there’s also an issue of time zones. If the NHL is trying to make more fans in the UK, maybe a smarter plan might have been to send two teams that don’t start most of their games at 3 or 3:30 am London time.

2. Destination
While the notion of having NHL games in Europe isn’t a bad one, the actual destination of London is bizarre—unlike many choices in Europe, England is not a hockey hotbed and there aren’t many Brits who make it to the NHL level. I mean, certainly there are British hockey fans, but how the NHL managed to pick a location where most of the locals are indifferent or unaware is beyond me. It’s not that it’s a hugely horrible decision, but it really begs the question—why not Sweden, or Finland, the Czech Republic, or Russia, a place where the NHL would be more warmly received?

3. Personnel
I’ve made a point of it before, but it is interesting that the NHL is sending the Ducks, the least European team in the league, to play in Europe. Anaheim’s player bias was exacerbated by the short summer—Sammy Pahlsson remains out with a hernia surgery and Teemu Selanne still needs more time to consider retirement. While it is cool that the games feature the defending Cup champions, I can’t help thinking it would be a better draw to send a team with an actual European superstar on it. I can think of 29 better possibilities in that regard.

4. Opponent
I’ve got a few mixed feeling about the fact that it will be the Ducks and Kings playing. On the one hand, they are pretty bitter rivals and probably will make for some exciting hockey, but on the other, the NHL took two of its guaranteed sell-outs and shipped them overseas. It’s a curious move for a league that is pretty gate-driven, at least. Surely there are games on the NHL’s schedule that could have used a London attendance boost more than Ducks-Kings.

But take heart, London! I’m not really here to make a big fuss about this; in fact, I’m having trouble caring about these drawbacks at all. Sure, the opening travel schedule for the Ducks is way inconvenient for the team, but as a fan, I’m not letting their issues get to me. For instance, the short summer might suck for a hockey player, but coming from the TV wasteland that is Southern California, I’m delighted to see hockey again this soon. And sure, maybe the team is screwed by all this early-season travel, but given the choice, I’d rather be screwed in the first few games of the year than sometime later.

As an aside, if you haven’t seen the Ducks’ picture gallery of the team flying to London, it is perhaps my favorite team photo gallery ever. Not only do you get to see such great shots as Pronger getting his bag searched, Bryzgalov and Perry being screened with a hand-wand, and Parros doing a crossword puzzle, but damn, these Ducks fly in style! Anyway, I will be stealing from this picture gallery a bunch, I bet, so I figured I’d better link to it now. 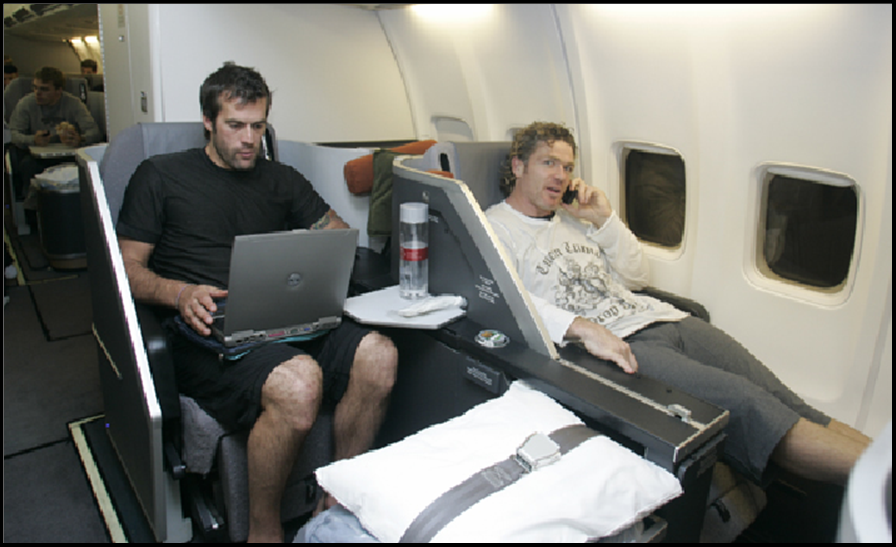 This is the part of the plane where they keep the criminals.

Also, Sleek-favorite Sammy Pahlsson briefly answered some random questions—it turns out he hates Joe Thornton because he resembles the cast of "Dude, Where’s my Car?" Or something like that.