I am hereby declaring a moratorium on all King’s goaltending talk until the season begins. Yes, everyone knows Cloutier sucked last year. Yes, everyone knows the Kings didn’t bring in a goaltender during the off-season. (Who the hell were they supposed to bring in anyway? The Sharks probably wouldn’t have sent Toskala to L.A. and Manny Fernandez isn’t any better than what we have now. Please, tell me.) Let’s just shut up about it until we know if it’s actually something to be concerned about. 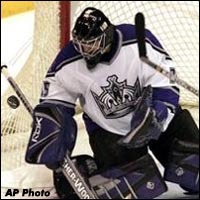 That save was unproven.

The biggest problem I have with the articles (here’s the latest one) that claim that the Kings are doomed because of their goaltending is that they just completely dismiss Jason Labarbera. He’s not some unproven 21 year-old kid; he’s 27 and played well in his first NHL action two years ago before something happened with his personal life that caused him to miss about a month of the season. He’s won the Baz Bastien award (the AHL’s Vezina) twice and was completely dominant down there last year. He would have been starting for the Kings by November last year if they had been able to call him up. I would be shocked if Labarbera has a save percentage less than .905 at the end of the season. He’s the kind of guy that will start off playing well and then the same idiots who wrote that the Kings were doomed will write new articles talking about how he came out of nowhere. 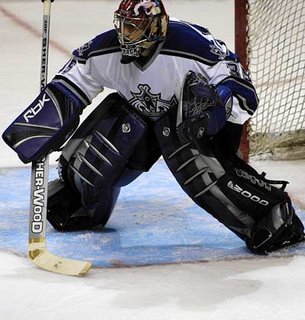 I know that I probably get more annoyed than most because I read every single article that comes out about the Kings, but seriously people, it takes 15 seconds to type "Jason Labarbera" into Google and find his stats on Hockeydb.com or something. If Labarbera can play like he did two years ago (when he had a 2.89 GAA and a .900 Sv. %), then I think we’ll be okay. Not great, but okay. Until the situation changes, why don’t we all just take a deep breath.

Also, Eklund thinks the Kings have a shot at signing Selanne. I don't even know what to say to that.