The joke that Ducks messageboard moderators don't want you to read

Share All sharing options for: The joke that Ducks messageboard moderators don't want you to read

I was lurking on Ducks messageboards last week, trying to get a handle on retirement rumors, when some user started a new thread with a Kings-Ducks joke. I copied it to e-mail it to one of my friends, but when I went back to link to it, moderators had already pulled the thread. I don't know who to credit this joke to, but it's BoC-themed enough; maybe this helps set the stage for London later this month.

One foggy night a Kings fan was heading south and a Ducks fan was driving north. While crossing a narrow bridge they hit each other head-on, mangling both cars.

The Kings fan manages to climb out of his car and survey the damage. He looks at his twisted car and says, "Man, I'm lucky to be alive". Likewise, the Ducks fan gets out of his car uninjured, he too, feeling fortunate to have survived.

The Duck fan walks over to the Kings fan and says, "Hey, man, I think this is a sign that we should put away our petty differences and live as friends instead of being rivals."

The Kings fan thinks for a moment and says, "You know, you're absolutely right! We should be friends. In fact, I'm going to see if something else survived the wreck." The Kings fan then pops open the trunk of his car and removes a full undamaged bottle of Jameson's Irish whiskey and a 6-pack of Guinness. He says to the Ducks fan, "I think this is another sign that we should toast to our newfound friendship."

The Kings fan calmly twists the cap back on the bottle, throws the rest of the bottle and the Guinness over the bridge into the river and says, "Nah, I think I'll just wait for the cops to show up." 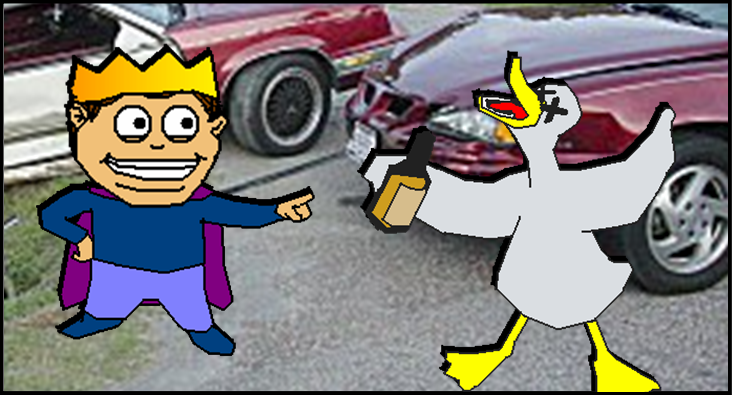