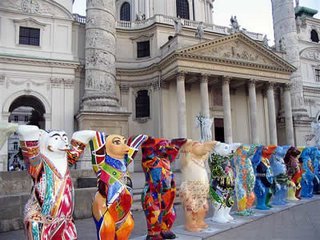 
The Kings are still in this mythical land of Austria, where people wear hats on their feet and the hamburgers eat people. (Jesus, is that the Australia episode too? That’s a good one.) Despite some… difficulties yesterday, the Kings still managed to win. Labarbera’s struggles in the game mean that he’s obviously worthless and we should just ignore the 80 games he played last year. (Playing goaltender on an international ice surface is way different because you have to adjust how you center yourself; I’m sure that was the problem. At least, I think.)
Anywho, the Kings now play some Swede team that I don’t know and will probably kick the hell out of them. (The day I fear something Swedish is the day I die at the hands of Matty Norstrom.) I assume Bernier will start this time, but I’ve given up on guessing what the hell the Kings are doing. Puck should drop in about 45 minutes.

Prediction: Kings, 6-2. 2 goals by Calder, 2 by O’Sullivan, 1 by Nagy and Brown. Kopitar will have 7 assists because he can do that.

Yesterday over on Inside the Kings, Rich Hammond quoted Marc Crawford as saying that Alexander Frolov and Michal Handzus were hurt. I knew about Frolov, but Handzus? He had his tonsils removed like a month ago! I’m beginning to think he may actually be a woman, or even worse, a baseball player.

I’m doing a live-blog! It should be Saturday, barring unforeseen circumstances. I’m sure I’ll be incredibly witty for the 1st period, realize I’ve made a huge mistake by the 2nd, and completely mail it in for the rest of the game. Should be fun. I usually wait until a live-blog is over before I start to read it, but if you’d like to follow along in the comments, feel free.