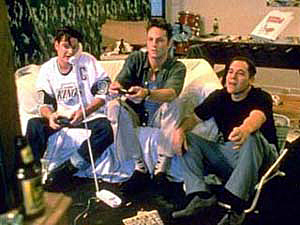 "The Kings suck in this game, you should play as another team."

The Kings are going to try and give the Avalanche the ol' rainman sweep tonight at Frozen Fury tonight. I'm not sure why they do this every year, but it gives Kings fans an excuse to go to Vegas so it's cool with me. There's no word on which goalie is going to start, but my money's on Labarbera. I'm also predicting that Kopitar gets 2 goals tonight because, as you all know, you always double down on 11. I'm also hoping that someone makes Ryan Smyth's head bleed. (Oh, I'm the asshole? I'm out of here. I'm not eating here... I wouldn't eat here... I'd never eat here anyways.) 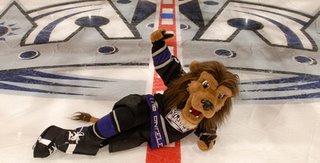 The Kings unveiled their new mascot, Bailey. He's so money and he doesn't even know it. (Okay, I'll stop.) I must say, he's a pretty cool cat. Check out his bio; it's kind of funny to read it and imagine some college graduate pain-stakingly putting it together. He's far superior to Sharky (Sharks can't wear jerseys!) and he's not on fire so that puts him above Wild Wing. Welcome to the Kings, Bailey; you've made a big mistake. 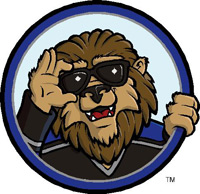