Dallman when we want to lose


I’m pretty optimistic about this upcoming season. Despite last season’s troubles, the Kings still proved that they had a lot of young talent ready to break out. Mike Cammalleri and Alex Frolov can no longer be called "prospects" and both of them led the offense for much of last year. Anze Kopitar descended upon us with golden wings and will probably be our best player this year. Dustin Brown kept improving, slowly but surely, and should improve even more this year as he gears his game toward a more grinding, power style. Patrick O’Sullivan had a little trouble adjusting last year, but it’s going to be difficult for a young player when he realizes that his old moves don’t work in the NHL; he should thrive this year if he can play with a guy like Ladislav Nagy. Jack Johnson is in a perfect position to thrive in the NHL and will assume a larger role as the Kings diminish Rob Blake’s. Jonathan Bernier is playing with house money at this point. Those are just the young guys that are currently on the team; I haven’t even mentioned Thomas Hickey or Lauri Tukonen or Trevor Lewis or Brian Boyle. If these guys can continue to improve like they did last year, the Kings are going to be much better than most people think. 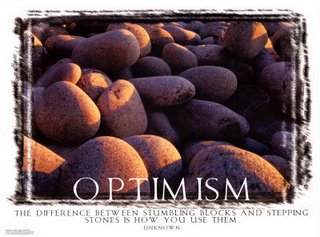 The most important thing Dean Lombardi did this off-season was improve the depth of the Kings. At this point last season, the Kings were pondering lines like O’Sullivan-Conroy-Cammalleri and Frolov-Kopitar-Willsie. We have three lines this year that are better than those two. Say what you want about Ladislav Nagy or Kyle Calder, but they are clearly better than Eric Belanger and Tom Kostopolous. I think a fundamental flaw in John Buccigross’ recent article about the Kings is that he thought guys like Nagy and Michal Handzus were going to take Cammalleri and Kopitar’s ice time. They’re not taking their ice time; their taking Scott Thornton’s and Konstantin Pushkarev’s. (Forgot he was on the team, didn’t you?) The same thing with the defense: Lubo will still get a lion’s share of the power play time, but we won’t have to rely on Matty Norstrom and Kevin Dallman on the 2nd power play unit because we have Tom Preissing and Brad Stuart.

I’m pretty pessimistic about this upcoming season. The Kings goaltending situation is even worse than could have been imagined. Dan Cloutier was obviously unhealthy and had to be sent down. Jason Labarbera, too, has been pretty bad this pre-season. I’m not sure why he's struggled, but he was supposed to be the guy who, if not great, was going to be consistently average for us. J.S. Aubin is not really worth talking about. The only guy who has inspired confidence is a 19 year-old kid who has never played a day of professional hockey. The list of NHL netminders who enjoyed success in their teens is as follows: Tom Barrasso. That’s the list. Unless Bernier becomes the 2nd coming, there’s no way the Kings can prevent a repeat of what happened last year. 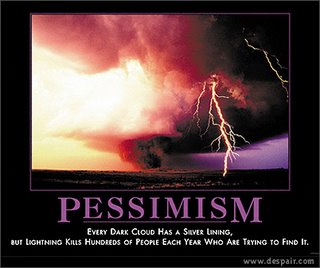 The Kings have improved their depth for relatively cheap, but the question not being asked is why these players were cheap. Handzus is coming off major knee surgery. Nagy has either been great but hurt or healthy and average. Kyle Calder failed to live up to his initial hype. Brad Stuart was awful the past two years. Even Tom Preissing got benched during the Stanley Cup Finals. The signings seemed smart, but there was a reason 29 other GMs didn’t sign these guys. Even if the Kings had signed a guy like Drury for too much money, you could at least be guranteed some measure of production. The Kings have no such luxury.

During Mike Cammalleri’s arbitration hearing, Dean Lombardi talked about how Cammy had put up a lot of points on a bad team. The implication was that this was an indication of a lack of talent with the Kings rather than an abundance of talent in Cammalleri. The same argument could be applied to Kopitar or Frolov as well. (The fact that Brown did not pile up points with the amount of ice time he got scares me.) That’s the major problem with much of the King’s young talent; sure, they’ve been good on a bad team, but can they be good on a good team? I’m not sure about some of them. Last year, there was no pressure for them to perform. This year, there is.

I’m more in line with the first argument than I am with the second. Ultimately, I think the Kings are going to make the playoffs this season. For those who are still skeptical, here’s my rationale:

The Kings do not have to be one of the 8 best teams in the Western Conference; the Kings need to be one of the 3 best teams in the Pacific Division. Because of the unbalanced schedule, it’s pretty much guaranteed that there will be 3 teams from 2 conferences in the playoffs and then 2 in the other. I think the Pacific and the Northwest will get 3 each, while the Central will get 2. Of the three teams in the Pacific that get in, I think we can obviously write down and and dismiss . That leaves and Dallas. The two of them are opposites: is all defense and no offense (when was the last time you saw a team so dependant on defensive scoring?) while the Kings are mostly offense and no defense. has been looking like they were going to fall off a cliff for years now, and I think they finally will this season. Who is going to score on that team? I think the Kings will get just lucky enough with Kopitar and Cammalleri leading the way while the Frolov-Armstrong-Calder line will get an article written about them by December. (Hopefully Darren Eliot doesn’t write it.) 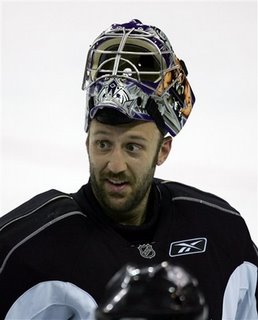 I almost changed my mind based solely on this picture.

Here’s my 100% bullshit, completely made-up guess as to how the Western Conference breaks down (Eff the East):

So that’s how I have everything breaking down. I’m not too attached to these (though I did spend way too much time thinking about it), so feel free to eviscerate them in the comments.

I was stumblin’ around Youtube the other day and I came across this:


That Game 3 is probably my favorite memory as a Kings fan. When Eric Belanger scored in overtime… well, people always say the birth of your child is the greatest moment of your life, but have you ever actually seen a birth? It’s disgusting. And weddings? No thanks. (Besides, my wife will probably be ugly anyway.) So yeah, that will probably be the greatest moment of my life. This team, this season, is the first time I've felt good about the Kings since that moment. Do I know if the Kings can actually make the playoffs this season? No, but I look forward to finding out. Go Kings.