Alex Frolov can be very frustrating if you’re a Kings fan. Sure, he’s one of our best players and a promising young talent, but he can be so quiet for long stretches at a time that you forget he’s on the team. I feel bad for him sometimes because I get the feeling that Kings fans spend too much time criticizing him for what he doesn’t do instead of focusing on what he does do well. Let’s take a look at the common criticisms of Frolov and see how they hold up: Look, he doesn't even move his feet in practice!

He’s slow. This one has always bothered me, because it’s never seemed the least bit true. I will admit that he looks slow, but that’s only because of his skating style. He has a very economical skating motion and I think that tricks a lot of people into thinking he’s slow. Many Kings fans thought Sean Avery was fast, but that’s only because he moved his legs like a mad man; when Frolov and Avery played on the same line, it was obvious that Frolov was faster. One of my favorite Frolov moments from last year was this one:

Did you notice the defenseman he beat to the net? Maybe that’s the moment when Niedermayer decided to hang it up.

He’s inconsistent. This one is probably the complaint that holds the most water. Last season, Alex tallied 43 points in the first 41 games; in the last 41, he scored only 28. One cause might have been the fact that Frolov played in all 82 games last season. (It’s sad, but this is the only time I can remember where he didn’t get the flu. He’s like a baby, or an old person.) I actually think that might have hurt him a little bit. He seems like a guy who might need to be rested occasionally in order to keep him fresh (like J.D. Drew). They do this all the time with goaltenders and I’m not sure why they don’t do it with skaters.

He doesn’t shoot enough. I hear this all the time. Frolov does have a good shot, but he seems to prefer to hold the puck in the corner for long stretches of time and then make a wrap-around attempt that never works. I hate this play too; honestly, it annoys the fuck out of me. Still, though, Frolov scored 35 goals last year and had the 11th best shot percentage in the NHL. I think the reason his shot percentage is so good is a result of his selectiveness. While I do think Frolov should shoot more (he probably should play more in the center of the ice in general), I’d much rather take a guy like Frolov over a guy who constantly takes off-wing shots from behind the face-off circle. (Brownie points if you know who I’m talking about. Hint: his name is Sean Avery. I think he's the anti-Frolov.) 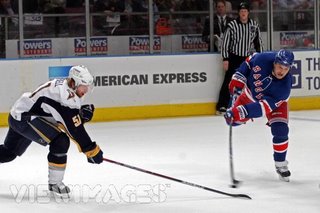 He hasn’t progressed fast enough. Frolov entered the NHL in 2002 when he was 20 years old. He’s played in 4 NHL seasons and has increased his point total every season. I think one problem many people have is that they expect players to explode overnight, like Kopitar or Crosby. A much more typical story is one like Lubomir Visnosvky’s, where they struggle to adjust and then eventually find what works for them. Visnovsky took 4 seasons before he finally broke through; if Frolov follows this pattern, he should make a big leap this season.

Frolov may never what Kings’ fans ask of him, but I think what they’re asking is a little unrealistic. Maybe we should be focusing on what does do well instead of what he doesn’t. He’s under contract for the next 3 seasons at a very cap-friendly rate ($3 mil this year, $3.5 the next and $4 in two years) and he will again be one of our best forwards this season. He may never be the player we want him to be, but the player he is can be pretty damn good.

(This is neither here nor there, but Frolov apparently has a Myspace page. Under "Heroes," it says, "My wife. Just Kidding." I don’t know why, but it made me laugh.)