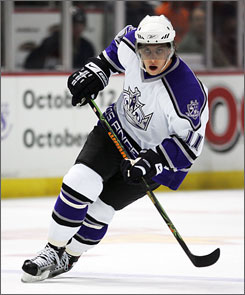 Anze Kopitar is a personal hero of mine. He’s one of the craziest players I’ve ever seen; he does something at least once a game that I never would have expected. The other guys that do that, off the top of my head? Joe Thornton, Scott Niedermayer, Alexander Ovechkin, Pavel Datsyuk. Now, I’m not by any means implying that Kopitar is as good as any of those players, but they’re all alike in that they are incredibly unique. A guy like Chris Drury will go to work and get his points, but he doesn’t really inspire you. He doesn’t make you say, "Holy fuck!" Seeing guys like or Ovechkin or Kopitar play is like going to church for me. I mean, watch this play:


I don’t know about you, but I’m inspired. And a little aroused. (Also, I love Jimmy when he gets excited.)

All that being said, I’m a little worried about Kopitar going into this season. He had such an amazing season last year that I think people may be expecting a little much from him. Kopitar was aided last season by the fact that he was on the 2nd line, meaning that he did not have to deal with the opposing team’s best defensive pairing. Teams began focusing on him later in the season, but he got hurt so we never really go to see those effects. I’m very interested in seeing how he reacts to that.

Of course, that may not affect him that much because of the way he plays. Kopitar did not necessarily make his linemates better (Brown played with him all year and only had 46 points). Instead, he utilized his defensemen to score goals. Going up against a guy like Niedermayer won’t really bother him; it’s the guys like Pahlsson, who get back and cover the trailing defensemen, who will give him trouble.

I don’t really have a solid reason for my pessimism of Kopitar; maybe it’s just a backlash against everyone else’s unceasing optimism. I mean, I hope he does well. I guess I’m just worried because there’s really no way of knowing what to expect of him until we know what line he’s playing on. If he does struggle, though, then I hope people will give him a break; despite appearances, he’s only human.

(Next Up: Ladislav Nagy.)