According to Matt Kredell over at Inside the Kings, the word around camp is that Brian Willsie has been the most improved player there. I assume this means that he was able to tie his skates without shitting himself. I despise Brian Willsie. There is no one in the world who could like Brian Willsie except for maybe his mom, and even she probably thinks he should just pass the puck instead of shooting so damn much. Where the fuck does he get off shooting 131 times, anyway? (That’s 8th on the team.) I'm going to preemptively sue him if he keeps this shit up for the years he's taking off my life. I don’t even know why he thinks he has a good shot; it's so bad he couldn’t score on Cloutier. (Zing… oh wait.) 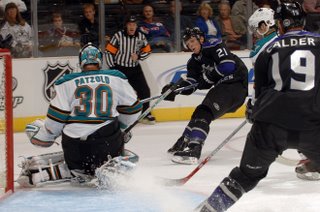 I give Scott Thornton a lot of shit but at least he’s old and is a cool guy off the ice. Willsie is supposedly in his prime and steals people’s organs in his spare time.* I loathe you, Brian Willsie. If you were to get hurt and miss all season, I wouldn’t be happy but… wait, I guess I would. Sorry, Jesus.