(I’m going to do my best to be rational and calm about this. Deep breath…)

Dan Cloutier was not good last year. In fact, some of the more hot-headed among us might describe him as a "miserable sac that deserves to die." (Easy…) He had terrible positioning, he couldn’t get down into a butterfly in less than 3 seconds (he looked like a 70 year-old trying to do pilates), and he basically ruined my life because he sucks and is probably a pedophile. (Count to ten…1, 2, 3…) He finally ended his season in the end of December with a hip injury brought about by extreme shame BUT NOT BEFORE HE RUINED THE ENTIRE SEASON, LEARN HOW TO STOP THE PUCK YOU MISERABLE BASTARD GOD DAMMIT I WANT TO PUNT YOU! (Okay, I need to go take a walk and pet a dog or something. I’ll be right back.) 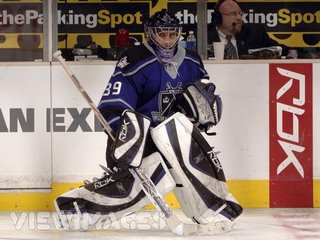 Jesus, he doesn't even know where the net is...

Okay, I’m better now. Despite Cloutier’s… lackluster season, I still have some hope for this year. The Kings were 29th in save percentage last season, 26th in penalty kills, and 27th in total goals against. That’s not good. However, the defense is greatly improved this season and if the Kings can get even adequate goaltending, they’re looking at a significant improvement in team defense. If it’s Cloutier, then great. If it’s LaBarbera, then that’s cool too. If it’s neither…well, then were probably screwed.

Cloutier had a bad year and I doubt he’s happy about it. By all accounts he’s a good guy and seems like he wants to help the team. I can’t help what other Kings’ fans do, but I am personally going to give him a pass for last season. I’m feeling optimistic; maybe he was injured all last year and this year he’ll play like he has in the past (2.8 GAA, .9 SV%). If he played like he did last year, though, then I’m all for giving him a blanket party. I’ll bring the soap.