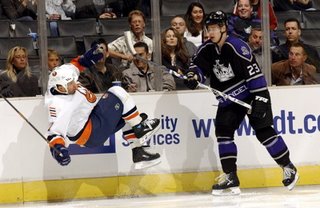 I am conflicted about Dustin Brown. Intellectually, I think he doesn't deserve a top forward position because his game is so one-dimensional; emotionally, I love him because that one dimension is so awesome. I got tired of the two parts of my psyche constantly bickering about him so I told them to decide the issue once and for all. Here's the transcript of that debate: 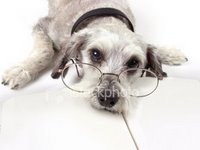 
Intellectual Rudy: My dear boy, I’m sorry, but there is just no way Dustin Brown is anything above a replacement level player at this stage in his development. He doesn’t move without the puck well, is constantly out of position on defense, and can’t-

Emotional Rudy: -BOOOO!!!. I don’t want to hear your "facts," College Boy. Dustin Brown is fuckin’ awesome. Remember that one hit against Joe Thornton?* He was all like, "Boom, Bitch!" Hahahaha… wait, what was I talking about?

IR: Yes, but the hit in question was after Thornton had completed his pass and therefore had little effect on the game. Most of Brown’s hits are like that: visually stunning, but ultimately negligible in value. ER: Yeah, but… boom! Hahaha! IR: I fail to see the point in your "argument." (*Chuckles, stirs brandy) ER: Yeah, well, I fail to see the point in your face! (*Guffaws, pounds beer) IR: Why, that doesn’t even make- ER: -anyway, fuck you. Brown is way cooler than you. Besides, he’s only 23, and most power forwards take longer to develop in the NHL. IR: Why, yes, that’s true… ER: Plus, did you hear that last night Brown destroyed Andy McDonald and then kicked Sean O’Donnell’s ass when O’Donnell tried to stand up for his teammate? IR: No, I hadn’t heard that. That’s pretty… awesome. Perhaps you’re right, my friend. I guess I underestimated you. ER: Cool...so now what?