There are three things about me that I don’t like people to know: I cried during Homeward Bound, I own the DiCaprio version of Romeo & Juliet, and I don’t mind Jaroslav Modry. That’s the Kings fan equivalent of saying I like to play with my own crap. It’s like a requirement for being a Kings fan: you drink too much, you make fun of the Ducks and the Sharks even though your team wears purple, and you hate Modry. I’ve never been able to. Really, I don’t understand the visceral reaction people have against him. 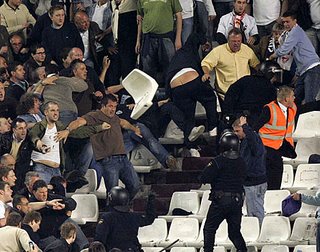 Kings fans did not take the Modry acquistion well.*

Modry was on the team from 1997 to 2004. He was one of our best defensemen for a couple of years (he played over 20 minutes a game in both 2003 and 2004) and was a nice balance to our two-headed monster of Aaron Miller and Matty Norstrom. He’s always been a pretty good offensive defenseman and he was our best offensive defenseman in the gap between Blake’s departure and Visnovsky’s emergence. He gets a bad rap for his defense, and he’s not really that good at it, but it’s not like he’s Souray out there or anything. Is he a good defenseman? No, probably not. Is he capable? Yeah, sure. Plus, he’s only costing us $1.2 million this year, which isn’t that bad for a defenseman who’s going to play every night. 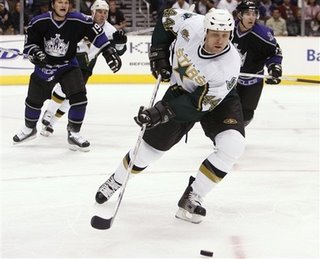 I think the reason people hate Jaroslav Modry is because he doesn’t fit into their pre-conceived notions of what a defenseman is. Most hockey fans love grinders, especially on defense. Guys like Jon Klemm, who are basically worthless but throw a meaningless bodycheck around every once in a while? Can’t get enough of ‘em. Guys like Modry, who are capable but are also labeled as "soft?" Worthless. I don’t really understand it. I think the reason the Sharks have been so successful in the past few years is that they have gone after defenseman who don’t really bring that physical aspect of the game but still know how to position themselves and play defense. I think Lombardi feels the same way in signing guys like Preissing and Stuart and getting Modry from . It may not be what people expect, but I think it’s what will work.


Modry will probably play with Jack Johnson this season and maybe get a little action on the power play. He’s a good person for Jack to play with; he can show him some tricks on offense while also forcing Jack to be defensively responsible (because Modry will be up most of the time; also, Modry will get beat a lot). I don’t know, maybe I’ll watch Modry this season and discover that I hate him, but right now I think he’s a solid (though not necessarily great) contributor to the team.